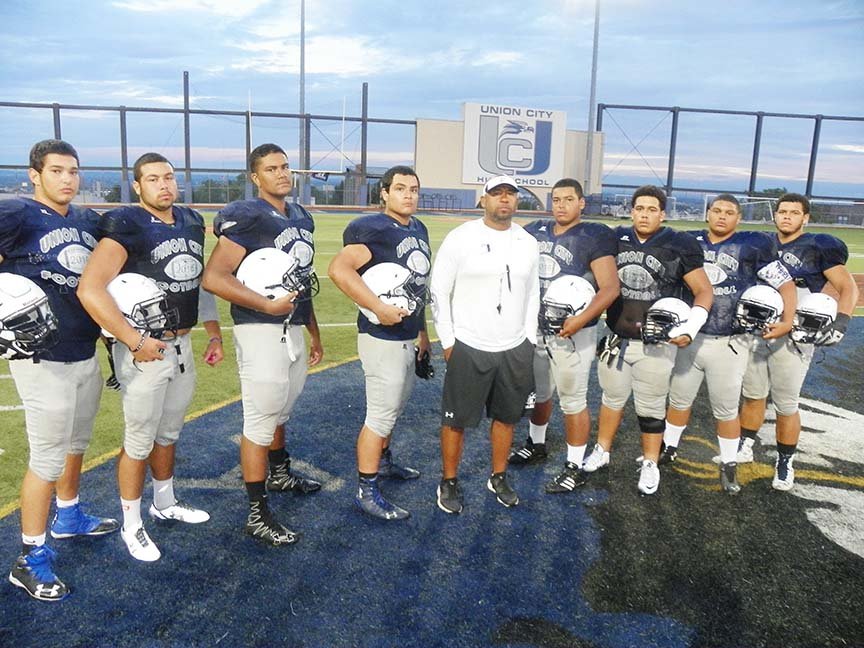 The sun had yet to rise on the roof of Union City High School and a wonderful palace called Roosevelt Stadium, but the Union City High football team was already hard at work.

It was 6 a.m. on a recent visit and the Soaring Eagles were already in midseason form, doing their wind sprints and agility drills before the crack of dawn.

The early practices are nothing new for veteran head coach Wilber Valdez, the former Hoboken High standout who played at the University of Miami. One look at the team’s uniforms and you will see just how much of an influence Valdez’s alma mater has on this program, with the famous “U” gracing everything from shorts to jerseys.

“We think that’s when the true character of a team comes out,” said Valdez, who begins his seventh season as the head coach of the Soaring Eagles and 15th as a head coach overall. “Getting them up at 5 a.m. shows me how much they want it. Only a special individual is able to do that. It takes a different kind of person. To do it once in a while is one thing, but we’re doing it three times a week.”

Then, after the Soaring Eagles enduring a grueling practice as the sun comes up, they retreat to the school’s weight room for conditioning drills. The season waits for no one in Union City.

“They’re doing something that not a lot of kids their age would volunteer to do,” Valdez said. “It’s become a tradition. Year in and year out, we keep producing a winning record. Winning shows them that they’re doing this all for something. It’s always going to be a part of this program.”

The Soaring Eagles were 6-4 last year, reaching the NJSIAA Group V state playoffs. Valdez takes a lot of pride in leading Union City to the playoffs every year of the school’s existence.

“It was our sixth straight playoff bid,” Valdez said. “It means a lot. Hopefully, we’re able to build off the 6-4 record. We have the ‘next man up’ philosophy.”

It means that since the Soaring Eagles lost so many top players to graduation, the next one in line has to be ready to play. It’s only fitting that it happens that way.

“A lot of kids go through the program,” Valdez said. “Our kids understand what it takes, going from freshman to JV [junior varsity] to the varsity. They eagerly await their opportunity to play. They conquer the responsibility. These kids are hungry to play.”

However, graduating so many seniors and losing eight starters isn’t an easy thing to overcome for any coach.

“They have to overcome so many obstacles,” Valdez said. “We try to make things as uncomfortable as possible.”

Fernandez was one of the top defensive players in Hudson County last year at linebacker, flying all over the field from sideline to sideline. In fact, Fernandez might be the best line-to-line defender since former St. Peter’s Prep great and current Baltimore Raven Will Hill.

Because of Hernandez’s defensive prowess, he’s been moved to safety this season.

But don’t sleep on Hernandez, the southpaw, as a quarterback. He has scholarship offers from Monmouth, New Hampshire, Villanova and the United States Military Academy at West Point. After all, Hernandez proudly owns a 3.8 grade point average.

“He has all honors classes,” Valdez proudly proclaims. “He’s the real deal, a dual threat, running and passing. He runs the ball hard and throws left-handed. He’s a great leader on the field and a perfect fit for us.”

“He has great feet,” Valdez said. “He’s deceptively fast. He’s tough. He does everything for us. He’s also the most non-selfish kid I’ve ever had. He never complains and just gets the job done. He’s one of my favorite kids.”

Kevin Paul (5-8, 180) is a junior transfer from Pope John of Sparta, where he played for two years, but will be able to play right away for the Soaring Eagles.

“We have a nice line,” Valdez said. “They all have some experience. The beauty of it is that none of the five double up, so we have a solid unit. We don’t have to get beat up.”

But Tavares has to play defensive end, where he earned Hudson Reporter All-Area honors last year.

Gonzalez is another defensive end, along with junior Lawrence Santana (6-2, 230).

The corners are Liverman and Reyes, both of whom started last year, with Hernandez at the safety slot. Others seeing time at safety include seniors Jefferson Manzanillo (5-10, 170) and Josiah Negron (5-9, 170), along with Thiam, Paul and Alvarez.

The Soaring Eagles open Sept. 9 at West Orange, then will face Dickinson at home for the second game of the season. Valdez likes being a part of the new Super Football Conference that was introduced officially at a press conference last Tuesday night at Clifton High School, with all 113 members of the country’s largest football conference participating.

“I like the new league,” said Valdez, who no longer has to face St. Peter’s Prep. “I think it makes sense demographically.”

And the new league will give the Soaring Eagles a better chance to soar in NJSIAA North Jersey Section 1, Group V come December.

Jim Hague can be reached via e-mail at OGSMAR@aol.com. You can also read Jim’s blog at www.jimhaguesports.blogspot.com.