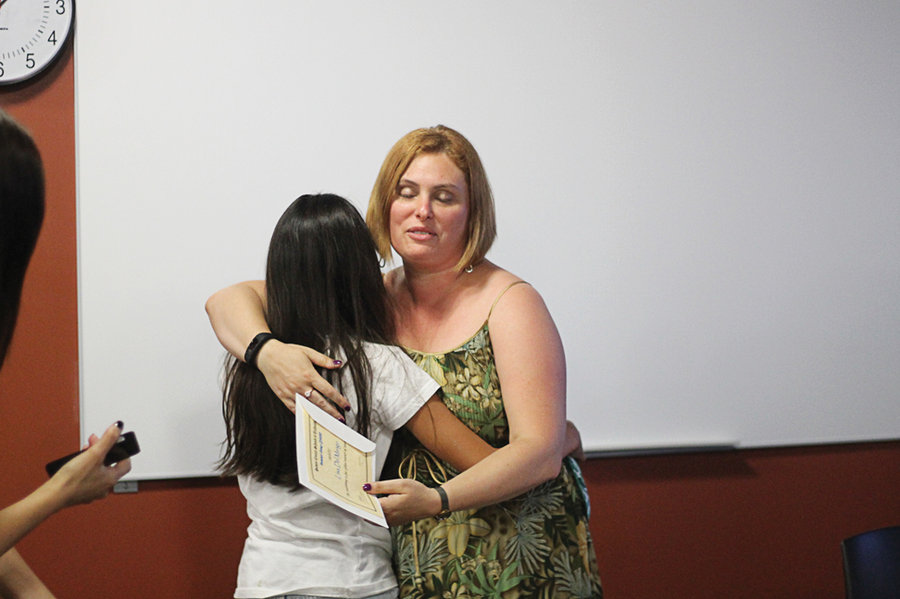 Josh Manosalvas of West New York didn’t know the students he met on July 6 were from Italy.
He and about 22 other students from Jersey City, North Bergen, Guttenberg, West New York, and Bayonne had gathered for an annual camp held by the Hudson County Schools of Technology.
“When I first met one of them, I thought he spoke English. I thought he was from America,” Manosalvas said.
He made a joke about a granola bar, but the other boy didn’t respond.
“I said ‘Okay,’ and went on with what I was doing. Later I found out he was from Italy and that explained it,” Manosalvas said.
Catherine McFadden, post secondary director for technical and adult education for Hudson County Schools of Technology, said the camp, a two-week pilot program inserted into the usual six-week camp, brought six kids from Italy to interact with kids from Hudson County.
The six Italian kids ranged in age from 12 to 14. The local kids ranged in age from 13 to 15. Two students took part in the camp as trainee counselors to help coordinate some of the activities.
The kids from both countries teamed up, each learning something from the other. The camp involved trips around the area, in particular to New York City, where they visited museums, including the 9/11 museum, and the High Line.
Over their two weeks traveling together throughout New York, Manosalvas and other local students bonded with these Italian students. Some of the locals learned a little Italian, while the Italian students learned a little English.

Lorenzo Gella, who was among the six Italian students, said love of sports helped bridge the language gap, especially when it came to soccer.
“I loved the sports part of the camp and dancing,” he said, noting the many differences between the school he attended back home in Italy and HCST, which served as home base for the summer.
Gella said he was intrigued by Manhattan, where the campers spent a lot of time over the two-week period they were together.
Will Mattei, vice principal at HCST, said soccer was popular among both groups of kids, but they also played other sports.
Alexsandro Argentini had not learned as much English as Gella, so he struggled both with the language and his emotions.
He called the whole two weeks “a big experience” and said he had grown close to his American counterparts.

Francine Fuschini, who previously taught in Italy before coming to HCST two years ago, invited some of her former students to take part in the camp.
“They tried to explore the area and learn English,” she said. “They visited the Empire State Building and other locations. They really liked Manhattan. They were amazed and excited, and thought it was something great.”
She said she will invite another group of older former students, ages 18 to 25, towards the end of the summer.

The Italian students got a chance to visit a variety of places in the New York area, while local students also got exposed to a foreign language, and learned how to bond with the Italian students. Both groups of kids got to play sports, work in the industrial arts, and tour places of interest.
As a concluding project, the students got together to create a five minute newscast that covered the culture, weather, foods, and other aspects of the local area.
Carla Deschapes, one of the teachers, said the camp involved mostly studies of the New York area, the fashion, music, weather, and sports. The newscast, called The Melting Pot Weekly News, basically covered these aspects. They even presented some of their bloopers and gave awards to each student.
Bill Smith, one the teachers from building trades, said his mission was to try to teach the students mechanical rules, such as how to use tools. Each student got to build a large storage box, prompting some of the Italian students to joke about getting these onto the plane for their return trip to Italy.
“The littlest guys, we taught how to build a kite,” Smith said.
Many of the kids from both groups cried at the parting, as the Italians kids got ready to leave.
“We wish you could stay with us for the rest of your lives,” Manosalvas said.