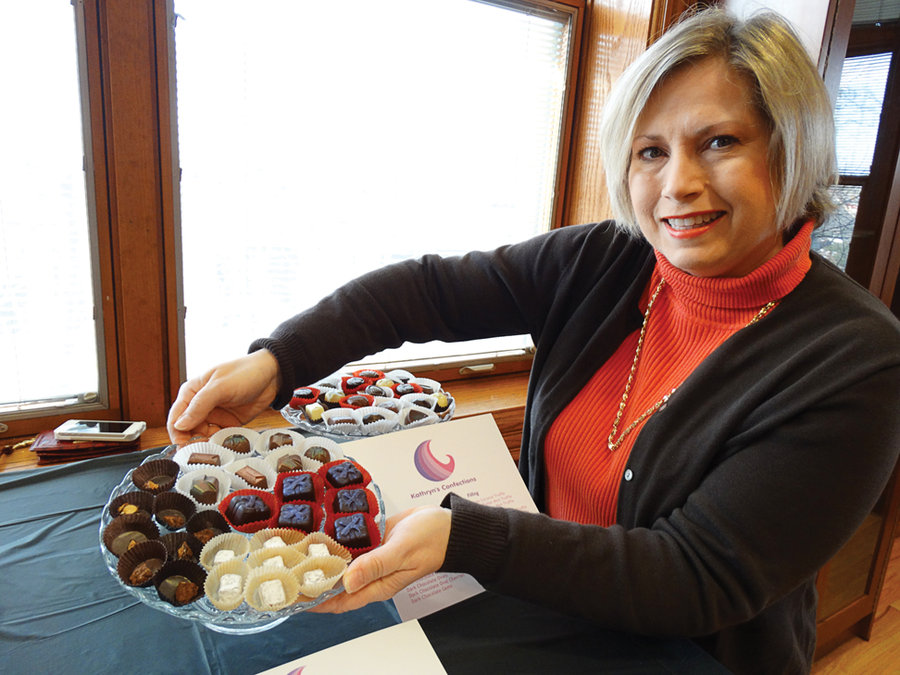 Gather ye tastebuds. The premier foodie event of the year is only days away, when the 15th Annual “Taste of Weehawken” festival takes over the food court in Lincoln Harbor on Tuesday night, April 28, offering all-you-can-eat delicacies from dozens of the area’s finest restaurants and vendors, along with a wide selection of craft beers and wines, all for one price.
As always, the event benefits the venerable Weehawken Public Library in the historic building at 49 Hauxhurst Ave.
“Every year we’re jammed,” said Mayor Richard Turner at a press conference this week to announce the event and introduce some of the vendors. “We get about 500 participants each year. And people love it. We dropped down a little bit during the recession but now people are coming out again, and it’s a reasonable price. You go from Ruth’s Chris to Houlihan’s to Charrito’s to Flaming Burrito.”
“The event is fun too because after a long winter a lot of neighbors haven’t seen one another,” said Joyce Flinn, owner of Amanda’s in Hoboken. “It’s a social event. And it’s a do-good fundraiser.”

_____________
“Great night, great food, great entertainment, great camaraderie.” Mayor Richard Turner
____________
Amanda’s has participated in the Taste for all 15 years of the event. What will they be bringing this time? “We usually don’t decide early on,” said Flinn. “Something that we can prepare that travels well. Something that will sell out. Whatever we bring always goes.”
Another longstanding supporter of the event is Houlihan’s, located just across the mall from the food court. “We’re going to be bringing our award-winning potato soup and our infamous stuffed mushrooms,” said Marketing Manager Alex Gulino. “We can’t not bring it, because people would be devastated. And then we’re also going to have the Chicken Navajo pasta, which is one of my personal favorites. It’s kind of a southwest spin on a pasta dish.”
“We love doing the event,” she added. “It’s a great way for us to be out in the community. We meet so many awesome people. I tell everybody, ‘I don’t care if you’re from Weehawken or live anywhere near there, you need to go to this event.’ It’s so much fun and there’s so much great food. It’s a party. And it’s for a great cause.”

Among the newest participants this year is The Jamming Pancakes (thejammingcupcakes.com), founded and run by Niurka “Nikki” Medrano. “It’s been about two months,” since she launched her business, said Medrano. “It’s still a baby. But it’s been my passion since 2009.”
Medrano learned to love cakes from her mom, who sold them in the Dominican Republic. After moving here she enrolled in culinary school and has been tweaking ingredients and perfecting her wide selection of cupcake recipes ever since.
“I don’t like regular vanilla so I use Dominican vanilla, which is more aromatic than regular vanilla. I use more natural ingredients than canned stuff. I don’t make the butter because I don’t have a cow,” she said with a laugh. “That’s the next step.”
Melissa Viera-Bodtmann is another new participant with her Little Melly’s Cheesecakes. “I’m a cook at heart,” she said, speaking for many of the smaller foodie vendors enriching the region. “I make different varieties of cheesecakes including mango, guava, and dulce de leche.” Encouraged by friends to start selling her delicacies about three years ago, she first began developing a customer base at her job, selling to individuals or parties.
“And then just recently I started around here and it’s been going great,” said the Weehawken resident. “I saw [Taste] in the Weehawken Reporter and I said I think this is the opportunity to get out.”
Kathryn Marlow is participating in Taste of Weehawken for the second year. In 2014 her Kathryn’s Confections (www.kathrynsconfections.com) was a hobby. Since then she has quit her job to make her “luxury chocolates” full time.
Marlow sources her own ingredients for her creations. “Our black walnuts come from Pennsylvania. In our dark chocolate sour cherry truffles, the sour cherries come from Hudson Valley. We pick those cherries. We go up when it’s cherry season and we pick like 70 pounds of cherries, 80 pounds of cherries. I made that for a wine pairing event recently. It’s so much fun to come up with different things and then see how they pair with this wine or that wine.”

“Everyone thought with the advent of technology the libraries would go out of service, pass away,” said Mayor Turner. “And [instead] you have more activities now because of the Internet, the computer.”
“Libraries have really resurrected themselves and have gone on to become major institutions again,” he added. “It’s a quiet place, it’s a research place, and it’s a place to learn.”
The Weehawken Free Public Library and Media Center offers a vast assortment of activities including art exhibits, author appearances, and children’s events. Mad Science of Union and Hudson Counties leads kids in a program of interactive science experiments. Flat Rock Brook Nature Center brings live animals and engages the children in discussions about nature.
“These are the type of things that urban children are not exposed to,” said Turner. “Sometimes we have to get a special piece of equipment for a special needs child or a senior citizen.”
Taste of Weehawken helps fund these programs and keep the library vibrant and meaningful.
“Weehawken’s library provides a valuable service for people of all ages and all walks of life,” said Flinn, from Amanda’s Restaurant. “Computers now are a big part of reading and a lot of people might not be able to afford a computer. They can use the ones here.”

Among the restaurants new to the event last year was Molos, the newly opened Greek restaurant along the waterfront. At this year’s press conference they offered a sample of their wares: a popular grilled octopus appetizer and olive oil cured scallops with a Greek caviar mousse. “We’ll bring much more” to Taste of Weehawken, promised Chef George Triantopoulos.
“Most likely something a little more Greek,” agreed Stacey Zapantis. “Maybe spinach pie.”
Flaming Burritos have been part of the event since they opened in 2009. “We’ll bring burritos,” said Manager Karen Cabral. “Some quesadillas as well, and obviously chips and salsa, which we’re known for, our flaming salsa.”
There will be food for every palate, with treats from across the globe. Represented at the press conference were Masina Trattoria, which will be offering its “classic Italian stuffed mushrooms,” and Paloma Negra, a new Mexican restaurant in Edgewater that is part of the Charrito’s family.
The exclusive wine vendor for the event, Giannone Wines and Liquors of West New York, will be returning for their fifth year. Once again they will supply 12 tables of wine, craft beers, and cordials. The program guide will include a list of all the available wines so patrons can walk around, sample to their heart’s content, and take notes.
Other participating vendors include Ben & Jerry’s, Los Charritos, Chart House Restaurant, Cremas Artisan Flavors, G.P.’s, Gladis Homemade Cakes, Haven Riverfront Restaurant & Bar, The Hudson Cakery, Ispresso at Park, Karma Kafe, Lorraine’s Table, Madison Bar and Grill, McLoone’s Pier House-Hoboken, Pier 115 Bar & Grill, Pizza Villa, Porto Leggero, Robongi/Hudson Blue, Ruth’s Chris Steak House, Son Cubano, Touch of Spice, El Unico de Elena, and the Weehawken High School Culinary Arts Program.
Two types of tickets are available for the event on Tuesday, April 28. Standard tickets are $35 in advance and allow patrons to sample the many delicacies between 7:30 and 9 p.m.. Preview tickets cost $60 and allow early access to the festivities from 6:30 to 9. “It includes not only an extra hour but also really, really nice raffle prizes,” said Mayor Turner.
Tickets may be purchased at the library, 49 Hauxhurst Ave. (cash, check or money order only) or online at www.brownpapertickets.com (subject to a 7 percent service fee). Tickets purchased at the door are subject to a $5 additional charge per ticket.
“Great night, great food, great entertainment, great camaraderie,” said Turner. “People meet friends from all over that they haven’t seen for a while, and we raise the money for the library.”