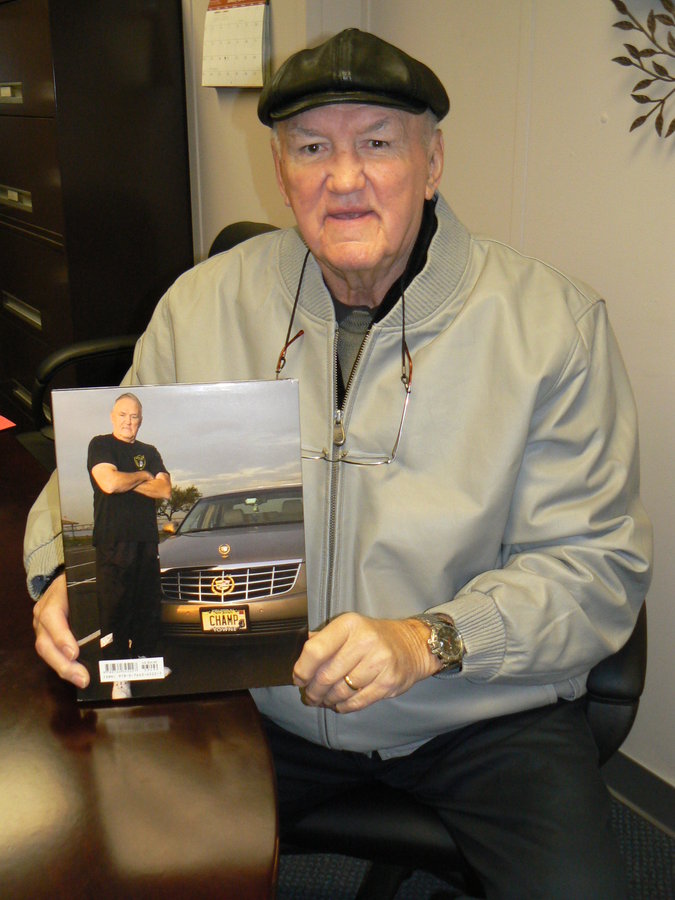 A number of city residents will unite next month to participate in another group mural project that will help beautify the city, but this time there will be an added benefit: The art will honor a native son, known for his courage and undying spirit, one whose name is synonymous with beating the odds.
Chuck Wepner, the reputed inspiration for the series of “Rocky” movies starring Sylvester Stallone, will be portrayed on an outside wall at Andrew’s Café, 737 Broadway, at the corner of 33rd Street, in a painting that will picture him in his boxing stance in his prime.
The Community Development Department-funded project, which will include a call for artists to participate, will be completed in time to observe the 40th anniversary of the March 24, 1975 fight in which Wepner stood his ground for nearly 15 rounds with “The Greatest,” heavyweight champion Muhammad Ali in a Richfield, Ohio boxing ring.
Virtually no one gave Wepner a chance at lasting that length with Ali, except maybe Wepner himself. Many predicted an early-round knockout.
The fight was called by technical knockout with 19 seconds left in the 15th and last round.
Legend has it that the then-unknown Stallone watched the fight on closed circuit television at Madison Square Garden in New York and was motivated to write the first Rocky script. The movie went on to win the Academy Award for Best Picture in 1976 and launch one of the most successful franchises in motion picture history.
Though he became a celebrity himself, and through the years was courted by sports, entertainment, and political royalty, Wepner has remained in Bayonne, the city he loves. The champ can still be seen in a fold-up chair, taking in a St. Patrick’s or Memorial Day parade as it wends its way up Broadway. In warmer weather, he can be seen at one of the city’s Summer Concert Series shows at 16th Street Park.

Coming up with the idea

The fact that Wepner is still a Bayonne guy, and the anniversary of his landmark fight was coming up, were the reasons the mural will be painted, according to Joseph Waks, former city municipal services director and avid artist. He has had many exhibitions and a number of his works are in private collections in the U.S. and Canada.
Waks worked with former Third Ward Councilman Ray Greaves to get the ball rolling on the effort.
“Bayonne’s a unique town, we’re very proud of its history, and we have a living legend right here,” he said. “I was like, yeah, we should do this. We should celebrate one of our favorite sons.”
Waks said a project of this magnitude is good for the community, bringing people together and being a civic pride booster. Mural programs have been successful in neighboring Newark and Jersey City. He feels the vibrant art community in Bayonne will respond to the call for artists.
Waks is tasked with the creative side of the project and its overall direction, which includes the dot-matrix design of the piece, which will be laid out on a special type of canvas-like material for painting.

Waks will be joined by consultant Rebecca Jampol who is versed in the technical aspects.
“She knows about the poly-fab material, what type of paint to use,” Waks said. “Also, coordinating the people from Bayonne. The scheduling. And then getting the finished product put up on the side of the building.”
After the design has been created, the piece can be broken down into sections, the colors chosen and applied.
“It’s not rocket science, but art is a problem-solving process,” Waks said. “You know what you want to do, but how to do it is not always the most obvious thing.”
City residents and workers joined forces in 2013 to paint a mural at 16th Street/DiDomenico Park, also sponsored by the Community Development Department.

_____________
“It was the highlight of my life.” – Chuck Wepner
____________
Community Development Director Samantha Howard and her staff have been busy making preparations for their next big project. The outdoor public ceremony dedicating the mural has been tentatively scheduled for Saturday, March 21.

Wepner said he’s honored by the mural. He remembers the big fight like it was yesterday. Because of his $100,000 purse, Wepner, a liquor salesman by trade, was able to train for a fight fulltime for the first time in his life. And he said it made a difference, with him entering the ring in the best shape of his boxing career.
“I came into it in great shape, ready to fight,” Wepner said. “I thought I could win the fight.”
He said that he was the only man to knock down Ali while he was champion, something he’s very proud of.
Wepner said he will always be grateful to Ali, a friend since the fight, for granting him the opportunity.
“He’s a wonderful man. I’ve had such a great relationship with him,” he said. “It was the highlight of my life.”
Wepner said he’s enjoyed the notoriety brought by that one day near Cleveland almost 40 years ago.
He admits that his life has had its ups and downs since then, including two divorces. He’s married for the third time now to Linda, and will celebrate their 22nd anniversary in September.
“Linda is my Adrian,” Wepner said. “I met her at 52 years old. I was ready. I was ready for the right woman at the right time.”