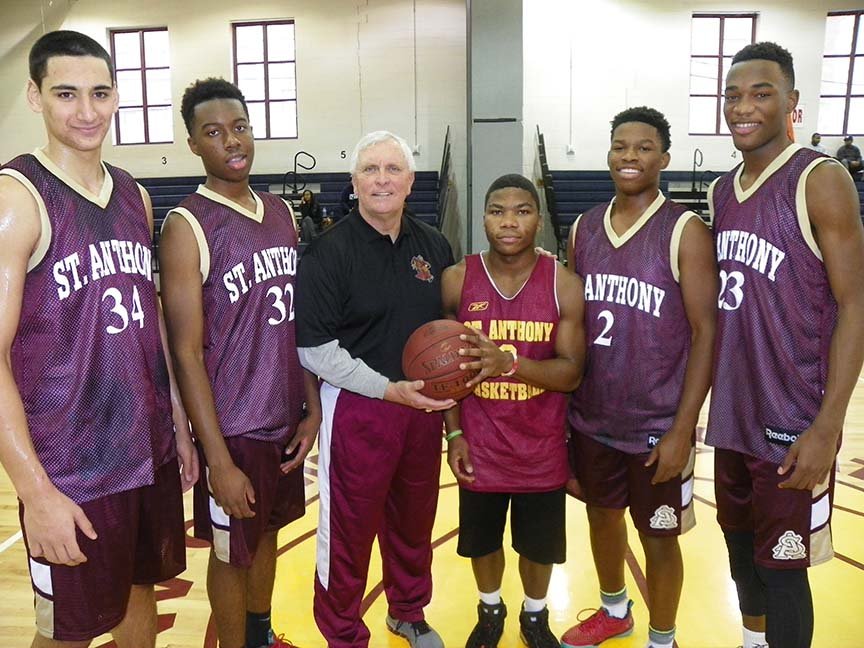 It appears as if the fabulous Friars of St. Anthony are fabulous once again.

Three seasons after St. Anthony won the national championship with the likes of All-American Kyle Anderson (now with the San Antonio Spurs of the NBA) and Myles Mack (now at Rutgers), the Friars appear to have all the makings of being a team that can flirt with an undefeated state championship season and quite possibly be atop the national rankings once again.

However, the Friars suffered a big blow playing in a holiday tournament in Boston last weekend.

Standout senior forward Markis McDuffie, the 6-foot-9 silky smooth forward who has already signed his national letter of intent with Wichita State, went up for a slam dunk and landed hard on the floor, directly landing on his chin. The fall suffered a huge gash on McDuffie’s chin, one that required a host of stitches.

“Thank God, there was no head injury, but he did land hard,” said the Friars’ Hall of Fame head coach Bob Hurley. “He’s going to be out for a bit.”

“He might not be able to come back,” Hurley said of McDuffie, who averaged close to 15 points per game, earning All-Hudson Reporter First Team honors last year.

But when McDuffie does return, the Friars are loaded, especially since junior guard Jagan Mosely has emerged as a sure-fire stud.

The 6-foot-3 Mosely has reached double figures in all four Friar wins to date, including a 26-point explosion against Central Catholic of New York at the tourney in Boston. He’s averaging 17 points per game thus far as a player who can play the point, the shooting guard and small forward.

“I would say his natural position will be as a point guard,” Hurley said. “He’s strong and athletic. He’s the high school version of Russell Westbrook.”

So if McDuffie is the high school version of Kevin Durant and Mosely is Westbrook, the Friars can almost be as good as the Oklahoma City Thunder.

“Only in video games,” Hurley laughed. “Jagan is a tremendous talent. He was with us on the varsity since he was a freshman. The focus has now been on him and with Markis out, he had to step it up and had that 26-point game, so he responded pretty well.”

Already Mosely is drawing attention from colleges _ and the list is impressive, with Stanford, Princeton, Harvard and Boston University (where his older brother Cheddi currently plays) among the front runners. And yes, he’s only a junior.

“He’s way more mature than he was a year ago,” Hurley said of the younger Mosely.

At the guard slot, Hurley can call upon juniors Javaris Hayes and Shyquan Gibbs and sophomore R.J. Cole.

“They’re all in the mix,” Hurley said.

Gibbs is the son of Snyder head coach Shelton Gibbs. Cole is a transfer from Newark Tech, where he scored 17 points per game last season. Hayes is 6-feet even, Gibbs at 6-foot-1 and Cole at 5-foot-10.

Up front, the Friars are equally deep, with 6-foot-9 junior Taurean Thompson back after missing most of last season with a broken foot.

“He’s just getting the cobwebs off,” Hurley said of Thompson, who also has the potential to be a standout NCAA Division I player. “He’s very agile and can run the floor well. I think people are looking at him as being more potential than his performance. If he reaches his potential, he really changes us. But he has to play to his potential.”

“He played a lot last year,” Hurley said of Joyner.

Another key inside player is 6-foot-8 center Mohamed Bendary, who has already signed his letter of intent to play at NJIT next year, becoming the second Friar senior to have a college scholarship already in hand.

“He just needs to rebound more,” Hurley said of Bendary. “He needs to do a better job inside, but he’s a much improved player.”

Kaleb Bishop, a 6-foot-7 forward who was part of the mass exodus at St. Peter’s Prep, has transferred to St. Anthony and is playing right away.

“He has a lot of athletic ability,” Hurley said. “Socially, he’s fit in well, but the stuff he’s still learning is all still very new to him.”

Hurley likes the makeup of his team.

“We have a lot of depth,” Hurley said. “We also have two players [McDuffie and Mosely] who are difference makers. Whatever Thompson does and where he could be changes where we are. If we can get steady performances from the others, the top two could carry us.”

Hurley likes the way the Friars are playing defense, a trademark of good St. Anthony teams in the past.

“Our four games so far, we’ve allowed 43, 33, 33 and 34 points,” Hurley said. “So we’re doing a better job that we did the last couple of years. We’re also getting some points off turnovers, which we didn’t get last year. We’re scoring off our defense.”

If there’s one aspect to the Friars’ play so far that displeases the coach, it’s more of a mental approach.

“We need to be a little tougher,” Hurley said. “We have to generate some toughness and I think they’ve responded to it.”

The Friars have to be tough over the next few weeks. After facing Roselle Catholic, they have games scheduled with the Patrick School, Christian Brothers Academy and Blair Academy.

“We’ll learn soon enough how good we are,” Hurley said.

Count on the Friars to be very good and to be playing deep into March this season.

Jim Hague can be reached at OGSMAR@aol.com
You can also read Jim’s blog at www.jimhaguesports.blogspot.com.