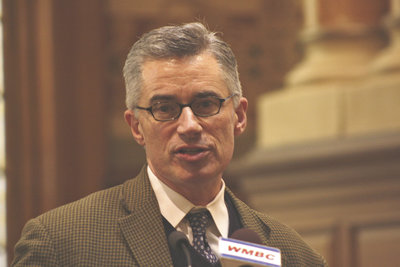 Raphael Martinez lapsed into tears during the Jan. 9 graduation ceremony in City Hall’s council chambers, telling a gathering of a few hundred people how his life got turned around over the last year.
“I’ve been on the streets since I was 15 years old,” he said.
His father was a drug addict, and over the last 30 years Martinez has been involved in a life of crime.
He said with his last incarceration he decided to turn his life around, and applied to the Most Excellent Way of Life Center’s rehabilitation program.
After a year in the program, he was among about 50 ex-offenders who graduated on Thursday.
While promoted as a graduation ceremony, the event had more than a little sense of a religious revival, with many of the participants giving thanks to God as well as city, county, and other people who helped make the program possible.
An ongoing program with people entering each day through the Hudson County Correctional Facility, this moment marked the turning point for about 50 graduates who had successfully accomplished the necessary requirements that would allow them to go from dependence to independence.

_____________
“It’s not where you start out in life; it’s where you end up.” – Lilisa J. Williams
____________
More than half those graduating, said former Gov. Jim McGreevey, were gainfully employed.
The program, which started in 2009, has two components, said Hanna Elezi (known by participants as Miss Hanna), starting with in-jail recruitment and followed up at release with a network of city and county support services.
Elezi serves as Social Rehabilitation Therapist and has won the affection of many of those who go through the program.
“Miss Hanna helped me so much,” said Barbara Murray, one of the participants. “She’s one of the reasons I’m doing as good as I am.”
Elezi, who showed her emotion at the graduation ceremony, blushing as some of the participants thanked her, said she has grown very close to the people going through the program.
“They are like my children,” she said.

But not everyone can take part. The requirements are strict and recruitment means that potential participants meet rigid criteria – the most important of which is that they have not been convicted of a violent offense or one involving sexual attacks.
Elezi also said the program tends to focus on men and women struggling with drug or psychological problems.
While most of those who participate in the program are from Jersey City, a number of others come from communities throughout Hudson County, and had been incarcerated in Hudson County Correction Facility in Kearny for non-violent offenses. They are recruited as part of a program that helps them overcome drug addiction, lack of education or training, homelessness and unemployment.
To graduate, a participant has to have gone through the year-long program and come out the other end with the tools for becoming self sufficient – which means drug free, with a home of their own, training and either a job or prospects for getting one.
The program has a number of strong advocates, including attorneys from the Hudson County Prosecutor’s Office who work to identify people who might qualify for the program and who advocate on their behalf in the court.
The program also has agreements with Hudson County Community College and the Hudson County Division of Family Services to help provide educational, job, treatment, and housing opportunities for those going through the program.
“When they are discharged from us, they are close to being self sufficient,” Elezi said, although she noted that some of the graduates will continue on after their year in the program in order to complete various aspects such as their education or job training.
Although the program graduated about 50 on Jan. 9, it is constantly recruiting new people.
Jersey City Mayor Steven Fulop said he hopes this program becomes not just a model for the state but the nation, on how to successfully integrate former offenders into the community.
The Fulop Administration is faced with the challenge of how to spread the benefits of new and upscale development throughout a city which has a large population of residents who are challenged by criminal history, drug addiction, and lack of occupational training.
McGreevey, who serves as the city’s director of the Jersey City Employment and Training Commission, said the goal was to provide an avenue for non-violent offenders to find a place in society. This has a multiple impact. Not only does this provide the city with productive, tax paying citizens, but it also reduces the population of potential repeat offenders, and cuts down both on street crime as well as the cost of incarceration.
With piano music by Dave Caldwell-Mason, a dance routine by Millicent Sellers, and a stunning violin and singing performance by Charisa Rouse, the Violin Diva, the City Council chambers rocked in a revival of hope. Along with Fulop and McGreevey, council members Michael Yun and Diane Coleman attended.
Coleman said she had a long history in the community of promoting programs that brought back people from the brink, and she seemed to glow with as much passion and hope as the graduates.
As if providing living proof of how someone can come back from the brink, Lilisa J. Williams, a former victim of molestation, a high school dropout, and a one-time homeless person spoke as keynote speaker. A published author, she has written and spoken often about her life journey from prostitute to becoming a Ph.D.
“It’s not where you start out in life,” she said, “it’s where you end up.”