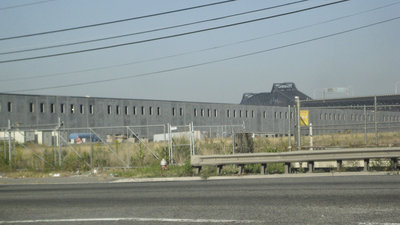 A once-controversial warehouse project on Jersey City’s West Side that broke ground this past spring has picked up its first tenants.
The AMB Warehouse Co. development, located where Sip Avenue meets Routes 1 and 9, broke ground in April, but already has tenants for its 880,000-square foot space on a site that was once a landfill. Peapod, the online grocery shopping and delivery service, and Imperial Bag and Paper Co. are currently among the warehouse’s two anchor tenants, according to Jersey City Redevelopment Agency Executive Director Robert Antonicello.
Antonicello said he does not know how many permanent jobs have been created at the warehouse thus far, but said, “the present projection is that approximately 1,000 jobs will be created” by the time the warehouse development is completed and the spaces is fully leased out.

AMB purchased the 50-acre site from the Catholic Archdiocese of Newark in 2000 and originally had plans to build an 883,000 square foot warehouse on the site, which had once been part of the old PJP landfill.
Around this same time period, Hudson County expressed an interest in the property so it could expand its nine-hole golf course to a standard 18-hole golf course.
Residents along the West Side lobbied for the site to be preserved as open space and converted into a public park.
A six-year battle ensured between Jerramiah T. Healy, who was mayor of Jersey City at the time, and the county. As Healy saw it, this was a fight between “jobs versus golf,” since the warehouse project was at the time expected to create approximately 350 permanent jobs.
Healy eventually won the fight with the county and in 2006 AMB Warehouse Co. began an environmental cleanup of the contaminated land.
When the recession hit the following year, plans to build the warehouse were put on the back burner until 2011 when AMB, which is based in San Francisco, bought the international company ProLogis.
ProLogis officials were, according to Antonicello, very interested in seeing AMB’s Jersey City project move forward and pushed to make the west side development a priority.
At present, there are about 250,000 square feet of space still available to be leased in what is now officially known as the AMB Pulaski Distribution Center.