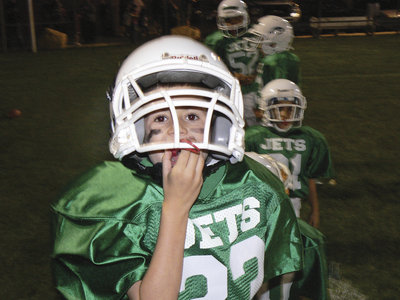 Approximately 800 North Bergen children are now officially getting their fill of recreation football after an opening night parade through the township on Friday, Sept. 13, and two season kick-off games.
Those hundreds of kids, between the ages of 5 and 14, include players, cheerleaders, and pompoms – not to mention family and friends. They are psyched that the pigskin premier has occurred and the games have started.
Begun in 1995, that march down township streets will eventually culminate in playoffs, all-star games, and maybe a championship crown or two.
The league consists of four in-house teams, with “A” and “B” squads, as well as three traveling teams which play in the Hudson Football League, according to Mayor Nicholas Sacco. Each team has its own cheerleading squad, for a total of eleven. And don’t forget the two units of pompom girls, ages 5 and 6.
“They’re all talented, whatever team they’re on,” Sacco said. “Some kids make it right off. Some try out for travel. Everyone gets on a team.”
Three hundred and fifty children actually play in the games, ages 7 to 12 on the in-house teams, and 9 to 14 on the travel teams. Other than travel, no child is ever cut from a squad, and every child plays in every game.
The 2012 in-house champion Vikings are looking to defend their title. On the travel side, the three North Bergen squads are hungering for a crown after all three teams, Giants, Eagles, Red Raiders, lost in their championship matchups last year.

_____________
“He has practiced for the last month. He’s very excited.” – Linda Pobutkiewicz
____________
John “Digger” O’Dell, a recreation department employee and master of ceremonies at the kick-off, said the evening’s festivities continue a long-standing tradition in North Bergen.
“This is our 65th year; we’ve been doing this since the 1950s,” he said. “We continue to grow and are still expected to be one of the best programs in the county.”
Jeimy Messina was waiting for the parade to wind down to the recreation center stadium, where opening day ceremonies would begin. Her son, Sebastian Perez, 12, is a first-year player for the Rams and was excited about his start in the league.
“He wanted to play. He asked me to sign him up,” Messina said. “He kept asking me once the date for the sign-ups was announced.”
She said she had seen a change in her son since he joined the league, and practices started.
“He’s more responsible now, at home and at school, Messina said. “He’s looking forward to making good grades at school and doing well at football. It’s incentive. He’s really liking it.”
Adlin Mojica was readying for her son, Justin, 9, to arrive. He couldn’t wait for the season to begin, according to his mother.
“He’s very excited – and mama’s nervous,” Mojica said. “He’s excited about the game. He hopes he plays a few plays and that they win.”
The league held a brief ceremony with comments by Sacco and Mayor Gerald Drasheff of Guttenberg, which has players in the league, and by North Bergen Commissioners Allen Pascual and Hugo Cabrera, Recreation Department head.
When the games began, Linda Pobutkiewicz of Grand Avenue and much of her family were gathered to see her nephew, Jack Stalknecht, 8, in his debut year on the Jets.
“He has practiced for the last month. He’s very excited. He’s very happy,” Pobutkiewicz said of her number 33, a wide receiver. “He does his homework and then can’t wait to get to practice. He’s happy about being with his teammates.”
Christian Moncayo, 13, has been playing in the township recreation league for several years. He was in attendance even though his travel team, the Red Raiders, would not begin play for two days.
“For me, it’s still exciting,” he said. “Seeing my old friends.”