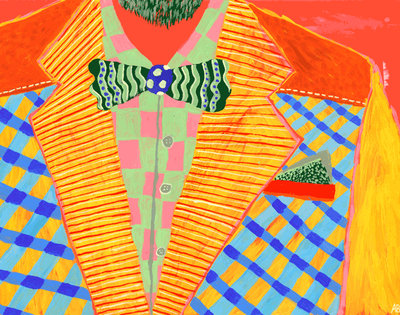 According to illustrator Ana Benaroya, curator of the exhibit “Strange Bedfellows” at Gallery 313, illustration is, by definition, an art form that is generally married to some type of text – a book, an article, a story. Once divorced from this text, however, the best illustration should stand on its own as an independent work of art.
To demonstrate the power of illustrative work as a visual art form, Benaroya pulled together the work of five local artists whose pieces have what she called a “narrative” quality that is akin to illustration. “Strange Bedfellows,” which opened at Jersey City Art School’s Gallery 313 on Sept. 14, features the work of Bruno Nadalin, Marina Kharkover, Ahu Sulker, and Amy Tamayo. Benaroya’s own work is also included in the exhibit.
Inspired by an exhibit she saw at the Barnes Foundation in Philadelphia in which pieces were selected based on how they looked next to one another, rather than by genre, artist, or the era in which they were created, Benaroya said she wanted to do something similar with “Strange Bedfellows.”
Benaroya said, “I liked the idea that an artist doesn’t only have to be seen next to their own work. So, I wanted to mix everybody together and create a new narrative, a new text, that connected the pieces…Part of my thinking with the show was to bring together the two worlds of illustration and fine art.”
The specific artists who were chosen for the exhibit were selected, Benaroya said, because of the emotional power of their work.
Nadalin was recently an artist in residence for Bryant Park in New York City. As a graphics designer specializing in textiles, Sulker’s work has been incorporated into fashions by Urban Outfitters, Target, Forever 21, Aeropostale, and other stores. Kharkover has created images for the Baltimore Symphony Orchestra and the Jackson Heights Poetry Festival in Queens. Tamayo’s work subtly explores the human body and human sexuality.
Professionally, Benaroya has created work for such clients as Lincoln Center, the “New Yorker” magazine, the “New York Times,” Simon & Schuster, and “National Geographic,” among others. However, she said her fine art work “bends the boundaries of gender. I like drawing feminine muscular men or very powerful women who appear womanly, but when you look closely, there’s something a little bit off.”
“Strange Bedfellows” is her first turn at curating an exhibit.
Gallery 313 is located downtown at 313 Third St. “Strange Bedfellows” will be on exhibit through the upcoming Artists’ Studio Tour weekend (Saturday, Oct 5 and Sunday, Oct. 6) and will run through Saturday, Oct. 19.