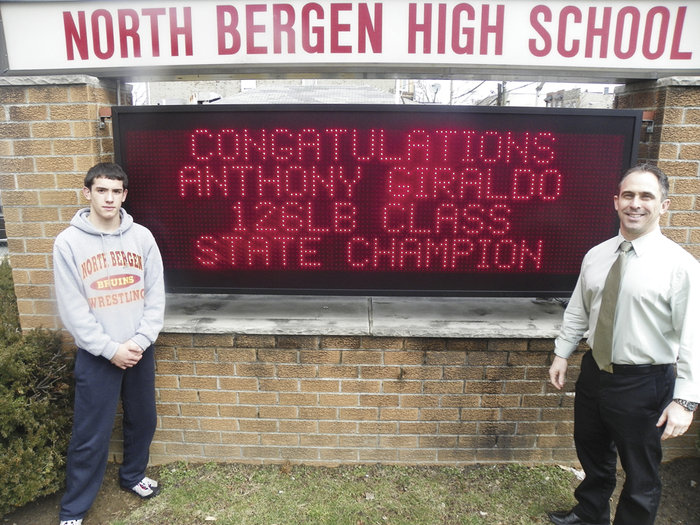 Guttenberg resident Anthony Giraldo achieved a slice of history last Sunday when he captured the 126-pound championship at the NJSIAA state championships held in Boardwalk Hall in Atlantic City.
Giraldo, a junior who attends High Tech High School, defeated Corey Stasenko of South Plainfield by a score of 3-1 to become only the fifth wrestler in Hudson County history to claim a state crown and the second from North Bergen High.
The only other state champion to come from North Bergen is John Bott, who won the 171-pound crown in 1983. Bott is currently a teacher at North Bergen High School, but is currently on leave to tend to his sick mother who unfortunately passed away Wednesday.
Giraldo has never met Bott. “But I’d like to someday,” Giraldo said.
Giraldo headed to Atlantic City with the idea that he could actually win the state title.
“All year, I knew I had a chance,” said Giraldo, who won 39 matches this season and only lost twice. “I just try to be confident that I could win the states. The closer you get to it, the more you can feel it.”
Giraldo had twice been to Atlantic City and came away with a medal. He finished fourth in the 112-pound bracket as a freshman in 2011 and was fifth last year at 120 pounds. Each time, Giraldo lost to the eventual champion.
“The way the tournament works, there are three kinds of wrestlers in Atlantic City,” said North Bergen head coach and athletic director Jerry Maietta, a former wrestler in his day at North Bergen.
“There are the guys who are happy to be there, the guys who are there to win a medal and those who are there to win the tournament,” Maietta said. “More than 4,000 kids wrestle in New Jersey. There are 300 who get to go to Atlantic City, but only 14 are crowned state champs. You need to be good. You need to stay healthy and you need a little bit of luck. Anthony had everything fall into place for him this year. It was his year.”
Maietta believes that Giraldo deserves his place in North Bergen wrestling history.
“As a former athlete, as a coach, this is my 19th year involved with North Bergen wrestling, 16th as head coach,” Maietta said. “We’ve had some really good wrestlers over the years. Since I’ve been here, we had three kids get to the finals. In my heart, I knew Anthony would win a state championship. I just knew it. When he came into our wrestling room three years ago, I knew he had what it takes to be a state champ.”
Giraldo has been dedicated to the sport since he was in sixth grade. Before that, he was a typically active Guttenberg kid, playing baseball, basketball and football.
“Once I got involved with wrestling, I gave up all the other sports,” Giraldo said. “It didn’t bother me that I was giving the others up. Coming from a small town like Guttenberg, where everybody plays everything, it wasn’t easy, but my friends understood.”
Giraldo eventually became a world traveler to compete in his favorite sport. He spent two summers in the Ukraine and last summer, Giraldo went to the Pan American Games in Venezuela.
“I gained a lot of experience and got better and better,” Giraldo said. “It really helped me to get ready for high school wrestling.”
The experience certainly paid its dividends last Sunday, when he stood atop the podium as the state champion.
The other three state champs from Hudson County are David Cordoba of Kearny, who won his state title in 1999, and James Fox (2011) and Lenny Richardson (2012) of St. Peter’s Prep.
Giraldo returned home to Guttenberg on Monday and Tuesday, he returned to classes at High Tech.
“It feels good,” Giraldo said. “Everyone is saying ‘Congrats’ and ‘Way to go.’ It’s cooler that it’s for High Tech and North Bergen and it’s also cool that it’s for Guttenberg. I always go back to my old school (Anna L. Klein) and see the people. They have been following me. I get all the North Bergen and all the Guttenberg people. It’s the best of both worlds.”