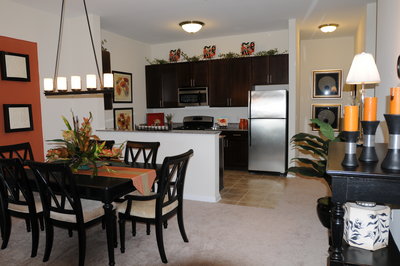 For some people, Xchange at Secaucus Junction appears a bit removed from the rest of Hudson County. The development is tucked away by the Frank R. Lautenberg Rail Station off exit 15-X on the New Jersey Turnpike. While other developers pursue waterfront properties along the Hudson River, Atlantic Realty Development Corporation seeks to build community and draw businesses to the Hackensack River and Laurel Hill Park instead.
Plans are in progress to add two more phases to the development. Xchange’s features currently include an amphitheater, a grand park, a dog park, a kids’ play area, and walking and biking paths. Developers plan to create a marina on the Hackensack waterfront with restaurants, stores, and a recreation center. They also hope to add a supermarket, something sorely lacking in town.
Phases III and IV will also include several hundred new units of housing.
People are set to move into Phase III of Xchange, which has 317 units, on April 1, and construction begins on Phase IV this summer.
The units to be developed in Phase III will include one-, two-, and three-bedroom units. These buildings will embrace green power, including energy-efficient appliances and solar tubes on top floors in the hallways.

The family-run company, which was founded in 1957, has primarily focused on building rentals in areas of New Jersey and New York over the past 10 years.
Jeremy Halpern, vice president of Atlantic Realty Development Corporation, said that the company pursued building at Xchange in response to the state’s need.
“Back eight or 10 years ago when we were looking at this area, there was a real push toward smart growth,” he said.
At the time, the state was working to expand the NJ Transit line and transform the “Secaucus Transfer Station” into the Lautenberg Rail Station, which became fully operational in December 2003. Xchange opened its first building with 304 rental units – including 64 affordable housing units – during the spring of 2008.

“We like to be able to create communities and not just homes,” said Halpern. “I love seeing houses and buildings that we’ve built and seeing people’s lives grow around that.”
While Phase III has the same footprint as the first two developments, with 8,000 linear feet of hallway, Halpern said that there are minor differences in details.
“Every time, we improve things slightly,” said Halpern. He said the decor is different and the building has two staffed lobbies, one on each side of the building. For Phase III they designed a virtual business center that people can access for a fee that offers an environment to conduct business as well as office space. Halpern said it was a way for individuals to work from home in an office-like environment.
With newcomers drawn to the development for the easy commute and parks, Xchange adds a new site to the town for socializing.
Halpern said that 80 percent of Xchange residents take the shuttle to the train station. Residents can use the shuttle for free.
“It is a very young and vibrant community,” said Halpern. He said families with children mostly occupy the affordable housing units.
The residents that live at Xchange are a very diverse group, many of Indian descent, a contrast with the Italian, Polish and German families that have been around for generations and co-existed near the town center further up the Hackensack River. Of the 16,264 people living in Secaucus, 20.04 percent are of Asian descent according to the 2010 U.S. Census. The Asian population outnumbers the Latino population by almost 300 people. Sixty eight percent of the population is white.

Halpern said that Atlantic Realty originally visited Central Park to snap photos for green space design inspiration.
“We are able to have many great extra features beyond just the housing,” said Halpern, describing Atlantic Realty’s approach to green design as “smart green.” He said that in the past the company built according to Leadership in Energy and Environmental Design (LEED) standards, but that the certification process, administered by the Green Building Certification Institute, is “much more focused on paperwork than they are on creating a product that makes the most sense.” LEED provides building owners and operators with a framework for identifying and implementing practical and measurable green building design, construction, operations, and maintenance solutions.
The developer put in LEED qualifying types of products into the buildings such as insulation and windows. They also put in a 4-acre, 1.1 Megawatt solar field that provides electricity the majority of the common spaces.
The buildings include energy efficient appliances, and solar tubes on top floors in hallways.
“We’ve experimented with wind turbines,” said Halpern. “Instead of putting up big light towers, we would much rather put up light towers with wind turbines.”

Phase III includes more one- and two-bedroom units, which are more popular, as opposed to three-bedroom units. The third building has 32 units filled. One bedroom units start out at $1,800; the low $2,000 for a two bedroom, and the mid $2,000 for a three bedroom.
While industry reports indicate the average asking rent for an available apartment in Hudson County increased by 7.2 percent from 2010 to 2011, Xchange rents have remained consistent.
“Our rents have been rather stable,” said Halpern. He said the company was able to keep the costs of land down by constructing four-story buildings instead of a high rise. “Because we kept costs down we can keep the price down.”

“We are trying to be the best resident to Secaucus that we can,” said Halpern. “We love Secaucus. We want to be there for them. When we move into a town, we stay forever.”
Halpern feels Xchange is very much a part of Secaucus and was pleased that Atlantic Realty could add another social area to the town. Xchange has hosted a number of the town’s summer concerts and movie nights, and it also held a special Christmas tree lighting.
In the future, the Xchange developers hope to bring a supermarket to the area. Foodtown backed out of their commitment to open a supermarket at the Xchange development last year because they didn’t think they could generate enough sales. The town has been trying to draw a major supermarket for years, since the Acme closed in the center of town. The closest thing that residents have is the food section of the local Walmart.