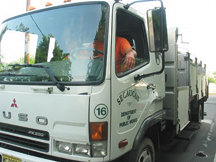 On especially hot summer days, the Secaucus Division of Public Works (DPW) employees reach for a bottle of water – like many people would – or accept bottled water offered to them by residents as they drive up and down the town streets picking up recycling.
When that water bottle gets tossed in a recycling bin, it starts a long journey that sends it to Jersey City, Edison, the port of Elizabeth, and ultimately to China to be made into various products.

“I wave to everybody I see. I know everybody,” said Kevin Kessler, 50, as he took a Secaucus Reporter staff writer along for the ride on the morning recycling route in June. A longtime Secaucus resident, he began working for the DPW in 1985. People in cars honked hello and waved back as the truck stopped at each home on Center Avenue.

_____________
‘I do spend a lot of time recycling. I hope they re-use it.’ – Gerry Dowd
____________
“You are here for life. It is great working in a close-knit community where you get to see people every day,” said Kessler about why he enjoys performing the unpopular job of picking up people’s disposables.
As he drove the white garbage truck, he said it was great to work with men like Rick Buesing, 25, and Erik Stenten, 23, who were riding on the side of the truck handling the pick-up.
“We recycle to save the earth,” said Stenten. A recent hire, he began working for the DPW four months earlier because he saw it as a good opportunity.
The national recovery rate for recycled and composted materials as of 2009 was 33.8 percent, according to the Environmental Protection Agency. That means that people are still throwing approximately two thirds of their recyclables out in such a manner that they don’t get recycled, or the place they live is not recycling their materials.
The Hudson County Improvement Authority (HCIA) reports that overall, the county recycles 28 percent of its waste stream. Mayor Michael Gonnelli estimates that Secaucus recycles at a much higher rate, between 60-70 percent of all solid waste. “We have a very high compliance rate,” said Gonnelli.
The HCIA agreed, and said Secaucus probably has a higher than average participation rate. A large portion of the population lives in one- and two-family homes, while it is a little harder to get full participation from the multi-unit apartment buildings in other parts of the county.
DPW workers said they see a lot of plastic water bottles recycled in Secaucus. But nationally, only 27.8 percent of PET (polyethylene terephthalate, made from natural gas and petroleum) plastic water bottles were recycled in 2009, according to the American Chemistry Council. PET is made from “virgin” plastic, meaning it hasn’t been previously recycled.

So where does your recycled water bottle go?

“Wherever it goes, I don’t know,” said Secaucus resident Rajesh Nagpal last week.
“I do spend a lot of time recycling. I hope they re-use it and that it is being put to good use,” said Gerry Dowd, 61, a Secaucus resident for 33 years.
A water bottle purchased at Natoli’s Pizza on Clarendon, for instance, makes its way to the curbside for recycling, and eventually ends up in China. This fact may come as a surprise to some residents, but is well-known among the Hudson County recycling industry.
In 2002, the U.S. shipped 450,000 metric tons of scrapped plastic to China, according to Garbage Land: On the Secret Trail of Trash (2006), written by Elizabeth Royte. As of 2007, China bought nearly 40 percent of the United States’ plastic bottles.
After a Secaucus water bottle leaves the curbside, it gets picked up by the DPW men and delivered to a facility in Jersey City called Galaxy Recycling, a family-owned company that has been handling solid waste for four generations.
In Jersey City, the co-mingled materials are weighed and then dumped on the tipping floor on top of an existing pile of plastics, aluminum, glass, and other waste. Galaxy doesn’t separate co-mingled recyclables in Jersey City but instead loads them into a truck that travels to Edison for the process of separation.
“We are the middle man,” said Vice President Thomas Giordano during a recent tour of the facility. “Our MRFs separate commodities.”
Galaxy processes and sometimes also picks up recycling for all the Hudson County municipalities with the exception of Hoboken, which just left the company after 15 years to use another that handles single-stream recycling — paper mixed in with glass, plastic, and aluminum.
When materials go to Edison, they get separated and compressed. Then they are taken to Port Elizabeth and shipped to China. In China, mills convert the materials into items like carpet, jacket insulation, polyester, sneakers, low-quality kitchen tools, and sandals.
That Poland Spring you drank at the Secaucus pool last week may just end up in a pair of slippers in Beijing.

Cat food, turpentine, and paint in the mix

Kessler, Buesing, and Stenten said that the biggest challenges on the job are dealing with the traffic, weather, and injuries from picking up overloaded garbage bins, broken glass, and debris.
“Whatever is in the recyclables falls out on top of us…like cat food, turpentine, paint…” said Stenten.
That day, someone had thrown out a can of paint that was hidden amongst their recyclables. The bottom of the truck had streaks of grayish-blue paint on it after the materials were emptied out at Galaxy.

“Secaucus does a great job in recycling. They actually do it the right way,” said Giordano.
By the right way, he meant that the materials didn’t come in plastic bags, which would have to be manually removed by people and the sorting machines.
The Secaucus recyclables looked clean compared to the items in the existing pile on the Galaxy tipping floor that came in from other parts of New Jersey and were mixed in with dirty, grayish-looking plastic bags drooping in the hot sun.
“The more you mix in, the harder it is…plastic bags are very bad…bottom of the barrel. We separate bags…then [the bags] have to be baled,” said Giordano.
While Galaxy does allow clear plastic bags, Giordano said black bags or supermarket bags are garbage and do not break down or decompose and that there is no home for plastic bags after being thrown away.

Digging a hole to the China mills

“When recycling first started, there were over 800 mills in the U.S.,” said Giordano. “Now there are fewer than 100. China is your biggest receiving country of recyclables.”
While clear glass can be recycled thousands of times, plastic degrades after being recycled. A plastic water bottle is not fully biodegradable. Parts last for centuries; and release harmful toxins into the ground during the process of decay, which could end up in the soil and water systems. Even though the quality of plastic decreases with each use, recycling is encouraged to prevent water bottles from ending up in the ocean or in a landfill. Environmental groups recommend eliminating buying water bottles altogether, instead switching to reusable, portable metal water bottles.
Secaucus’ recycling program dates back to 1987, said Kessler. Today the town encourages recycling by providing residents with a small green barrel and recycles mixed paper, co-mingled glass, aluminum, tin, and plastic. The town will pick up other items like refrigerators, stoves, washers, dryers, furnaces, air conditioners, hot water heaters, computers, televisions, and fluorescent bulbs. Residents can also drop off motor oil, spent oil filters, and antifreeze at the DPW compound.
The DPW is out on the road every day picking up recycling from both residences and commercial businesses. As Kessler drove around that morning in June, the truck filled up quickly and items began to spill out of the top, forcing Buesing and Stenten to wrestle them back in. The white truck was an old one, a large, open container that has materials thrown in over the top. The town will replace it in mid-August with a new packer truck, a standard, green garbage truck, one that compresses the recycling, prevents the materials from falling out, and reduces the number of trips required to cover the town.
Adriana Rambay Fernández may be reached at afernandez@hudsonreporter.com.