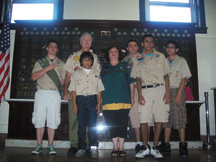 Local West New York Boys Scout Troop 1 is one of the oldest troops in the nation. The troop was founded by the Trinity Reform Church in 1910, the same year that the Boy Scouts of America was founded. The 50 troops in West New York are broken into three groups consisting of Cub Scouts from age 6 to 10, Boy Scouts 11 to 18 years of age; and Venture Crew, which is a co-educational group of boys and girls 14 to 18 years old.

Bob Gorman, Troop 1 Committee Chair, said that the kids are taught to be leaders. This summer, the boys will travel with other scouts from New Jersey to a camp that has limited supervision. So the boys will be given activities and tasks that will require them to be respectful of others while living independently in a safe camp setting.

Troop 1 will participate in various activities this year. They will fundraise for a food pantry they are constructing at Trinity Reformed Church to serve the hungry citizens of West New York. They have been collecting donations at the Farmer’s Market on Sundays from July 10 to Oct. 16. The market takes place at noon each week at 60th street and Boulevard East.
The kids will also be refurbishing donated park benches to be anchored at the corner of Palisade Avenue and 60th Street. The troop will be volunteering in the summer reading program at the West New York library from July to August. As well as helping with the summer arts program sponsored by the Trinity Reformed Church.

I am a leader

A few of the boys from the troop spoke about their experiences as Cub Scouts and what attracted them to Troop 1.
Ramon Pena said, “I have been a Boy Scout since 10 [years-old]. I wanted to join to see what I could accomplish and to mature more.”
He said he enjoys hiking. The boys already took a 21-mile hike from the church to Alpine, N.J.
According to Gorman, the kids are taken on short hikes and once they are ready for longer distances, they gradually add more miles.
Brian Sarmiento is a new member of the scouts. Brian said after Ramon brought him to a few meetings, he knew that participating would give him a new perspective on life.
Ivan Hernandez is 12 and said he was interested in the scouts’ activities and in community service projects. He hopes to go camping with his troop soon.
Michael Gorman has been in the troop for two years but has been exposed to scouting all his life since his dad, Robert, is involved. His interests include archery and community service. He is home schooled and aspires to someday go to college to study history.
Veevek Shah has been a scout for five years and was initially introduced to the scouts by a friend. Shah attends a private school in Englewood and plays soccer. He aspires to attend the University of Pennsylvania. One of Shah’s favorite activities is archery.
According to Robert Gorman, the Boy Scouts of America does not sanction hunting, but they do teach the shooting sports to interested members. The scouts are taught from Native American lore. They learn about living off the land and only hunting for meat if they really need it to survive in the wilderness.
Gorman said, “The survival skills I learned in the scouts were very handy to me in my military career.”
Santo Sanabria may be reached at SSanabria@hudsonreporter.com.