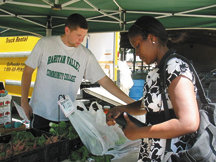 Secaucus is in talks with Foodtown in hopes of bringing a supermarket to town.
Residents have wanted a local grocery store since the closings of Stop & Shop at Mill Creek Mall in 2008 and Acme from the town center in 2004. Since then, the town has lacked a major supermarket.
The new store would probably come to the Xchange development at Secaucus Junction. It would measure approximately 25,000 to 30,000 square feet in size.
It has been more than a year since the last seriously interested chain, D’Agostino, visited town, but that courtship didn’t bear fruit.
“D’Agostino was very interested,” said Mayor Michael Gonnelli last week. But he learned that the supermarket had to close a number of stores in New York City because of competition from Whole Foods.

“I miss Acme terribly,” said Linda Diemer, a lifelong Secaucus resident. She was out visiting the farmer’s market to support the town. She typically does her food shopping at the Stop &Shop in Lyndhurst, or the ShopRite in Lyndhurst, she said.
“Our Acme before was very convenient,” said Aurora Manalo, a resident for 13 years. She added, “We really miss Stop & Shop…I know people go to the ShopRite on 32nd Street in North Bergen or Cliffside Park.”
Manalo travels to Manhattan and Tonnelle avenues in Jersey City to go to a Filipino market for items that she doesn’t find at Sam’s Club in Secaucus.

Foodtown is preparing a feasibility study according to Town Administrator David Drumeler. “This is an ongoing process,” said Drumeler.
The independent Foodtown owner currently runs stores in North Arlington and Caldwell.
In conducting the feasibility study, Foodtown is looking at the makeup of Secaucus, the size of the population, accessibility, and how people will utilize the store. They are considering the costs and how to tailor the store to the community’s needs.
“These things take a lot of time,” said Gonnelli. “They need to know what kind of expense is going to be involved.”

Food shopping at the Xchange

The Xchange development caters to young urban professionals, of which 88 percent commute to Manhattan. It bills itself as a “luxury” community with waterfront views and access to Laurel Hill Park. While the Xchange represents a new part of town less woven into the local history, some of the older residents who are a part of the Secaucus fabric are reluctant to venture out there. The Xchange is a little over two miles from the historic center of town.
“I would not go to Xchange,” said a senior Secaucus resident who did not want to give her name. She said she shops at the ShopRite in North Bergen but wishes for a place in the center of town that would make it easier for her to get to.
“We’re trying to do the best we can,” said Drumeler. “We’d offer transportation to and from Foodtown…whatever [supermarket] was there.”
Drumeler said the town currently offers shuttle rides to the Acme and Stop & Shop in Clifton, as well as the ShopRite in Lyndhurst.
The town believes that the Xchange is conveniently located with its proximity to Harmon Cove, access to the commuters who park at the train station, the residents at the Xchange, and the proximity to exit 15x off the NJ Turnpike.
“There are a lot of positives,” Gonnelli said.

In search of ethnic offerings

Secaucus is home to people with roots in all parts of the world including India, the Philippines, Japan, the Carribbean, and Latin American countries, to name a few places. Some residents seek out ingredients and food related to their culture. The residents at the Xchange are diverse, with a large Indian population.
Rinjal Parekh, who does not live in Xchange, lives near the town pool. She moved to Secaucus a year ago and returns to familiar Jersey City neighborhoods to go to Indian food stores or to go to the ShopRite.
“We need a good grocery store here,” said Parekh.

The local Walmart and Sam’s Club also offer groceries.
The Walmart renovated its “super center” to include a new food store, but it gets mixed reviews from residents. While some have adjusted their shopping routines to include Walmart on the weekends, others complain about the crowds and lack of fresh foods.
“Walmart has everything. I’m used to it. I used to go to the farmer’s market,” said Bernard Weber, a lifelong Secaucus resident.
Ingrid Baptist, a new arrival from Trinidad, finds Walmart reasonably priced. She also goes to the farmer’s market next to the CVS in the center of town. “Whatever is cheapest,” Baptist said.
Carol Marra, who was buying corn at the farmer’s market, avoids Walmart crowds. She makes the trip to the North Bergen ShopRite to buy groceries.
Another North Bergen ShopRite patron, Robert Mansfield, is interested in a place that fulfills all of his grocery needs. “Walmart is okay but it doesn’t have everything,” said Mansfield, who was looking to get white beans at the farmer’s market.
Adriana Rambay Fernández may be reached at afernandez@hudsonreporter.com.