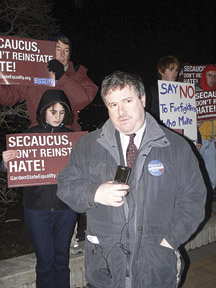 For the past seven weeks, an attorney from the law firm of McElroy, Deutch, Mulvaney has held one-on-one interviews at Secaucus Town Hall with various individuals as part of an independent inquiry into now-infamous incidents of anti-gay harassment that led to a lawsuit in 2008.
Two former residents, Peter DeVries and Timothy Carter who used to live on Schopmann Drive next to the North End Fire House, filed a harassment suit against Secaucus after allegedly enduring two years of harassment from a handful of firefighters.
The ongoing harassment culminated on one night in April 2004, when according to the suit, anti-gay slurs and violent threats were yelled outside the couple’s house. One attacker allegedly threatened to kill them.
In 2008, a jury in Hudson County Superior Court awarded them $2.8 million, on top of another $2 million for legal fees.
Since then, Secaucus has instituted sensitivity training for municipal volunteers, but the matter has not been fully resolved. The three former firefighters who were implicated in the harassment, but who were never charged with a crime, want to return to the fire department.

“Neither Tim nor I have been contacted by anyone related to this so-called inquiry.” – Peter DeVries
________

The Town Council ordered an inquiry into the April 2004 incident after supporters of the firefighters began lobbying in December for their reinstatement.
According to Town Administrator David Drumeler, Edward DePascale, the attorney leading the inquiry, has interviewed all three firefighters – Charles F. Snyder, his son Charles T. Snyder, and Charles Mutschler. But according to DeVries, he and Carter, the two alleged victims of the harassment, have yet to be contacted, raising questions from some.

Their exclusion from the list of people interviewed so far seems to stand in contrast to promises made by council members when the inquiry was approved in May. At that time, Mayor Michael Gonnelli and his allies said the inquiry would be fair and thorough, and they specifically stated that all of the major players involved would be interviewed.
The mayor, who is also chief of the volunteer fire department, went even further. Comparing DePascale’s inquiry to a “truth commission,” Gonnelli promised the investigation would also include an interview with Garden State Equality, New Jersey’s largest gay civil rights group. The organization held a protest in Secaucus in January after the council appeared poised to reinstate the three firefighters.
But like Carter and DeVries, Steven Goldstein, the organization’s president, has yet to be interviewed by DePascale.
Last week Drumeler emphasized that the inquiry is not complete and that Carter, DeVries, and Goldstein will be contacted.
“It is my understanding that a call was put in this week to Garden State Equality,” Drumeler said. “I know he has met with some people and still has to meet with several others. Other than helping to facilitate the phone calls, I really don’t have any involvement, because we don’t want there to be the appearance of tampering with the investigation.”

Snyder, Snyder, and Mutschler were never arrested or charged in the incident. During the trial, the firemen took the stand, but on the recommendation of their attorney, used the Fifth Amendment to avoid testifying. When the trial ended, the firefighters were supposed to have a closed administrative hearing before the town’s labor attorney. However, they chose to resign from the department rather than participate.
Weeks after Gonnelli’s election last November, members of the fire department delivered a petition with more than 500 signatures to 2nd Ward Councilman Jim Clancy, who serves as the governing body’s liaison to the Fire Department. The petition demanded the reinstatement of the three firefighters, whom many in the department believe have been falsely accused and treated unfairly.
The possibility that the trio might return led several members of Garden State Equality to stage a rally in Secaucus in January. Several gay residents also participated in the protest.

“Neither Tim nor I have been contacted by anyone related to this so-called inquiry,” DeVries said last week.
Drumeler said this isn’t surprising.
“I would imagine that [DeVries and Carter] would be the last people contacted,” Drumeler said. “Remember, they testified extensively in court and their transcripts are pretty specific about what happened…But there is no public record of the [firefighters], other than ‘I take the Fifth.’ ”
Goldstein was equally baffled that Garden State Equality hasn’t been contacted.
“Everyone in the world has my cell phone,” he said, adding that his number is on the organization’s website. “I would think even a token investigation would include a call in the initial stages to the state’s largest gay rights organization, especially if you want to give the investigation legitimacy at a time when there’s doubt.”
E-mail E. Assata Wright at awright@hudsonreporter.com.