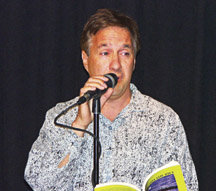 Artists are often known to “sing for their supper” – but next weekend, dozens of poets will read to help pay for someone else’s.
PHANfest 1, a fundraiser for Northern New Jersey food pantries, including the Secaucus Emergency Food Bank, will bring together area poets who will read excerpts of their original work at the Secaucus Public Library and Business Resource Center.
Food banks and food pantries are typically run by nonprofit groups, religious institutions, and local government, and they give food to needy families to keep them from going hungry.

“It’s an opportunity to…hear some fine poets from various regions of the state.” – David Messineo
________

At the June 13 event, each writer will be given an opportunity to read either one poem or 50 lines of their work for an audience. Writers and audience members are asked to make a minimum donation of $10 per person.
The brainchild of David Messineo, the editor and publisher of “Sensations Magazine,” PHANfest 1 could raise as much as $1,000.
At press time, 35 writers had already signed up to participate, and Messineo hopes to attract another 45 poets.
The entire proceeds of the event will be donated to area food banks. If successful, Messineo said that the money could purchase 2,000 cans of food for families in need and for the homeless.

The fundraiser comes at a time when area food banks report that donations are down and more people are showing up at their doors looking for help.
Last winter several shelter volunteers said they were seeing more seniors, families, single mothers with children, and working adults in need of food – far from the “homeless vagrant” stereotype that may come to mind.
“Food banks are really struggling right now,” Messineo said last week. “Charitable giving is down. People who maybe gave in the past are either giving less, because of the economy, or maybe they’ve stopped making donations entirely…I just thought this would be a nice way for New Jersey’s publishers to step in to help.”
Indeed the “PHAN” in PHANfest stands for Publisher’s Helping America’s Needy.

A veritable ‘who’s who’

The event promises to be a “who’s who” of emerging Jersey poets whose work has been published in top literary journals. To generate interest in the event, Messineo said he approached all 52 active publishers in New Jersey. That included the Meadowland Review, an online journal, and the Hoboken-based Poets Wear Prada Press.
“It’s an opportunity to meet some New Jersey publishers, as well as hear some fine poets from various regions of the state,” he said. “It’s extremely rare for New Jersey poetry publishers to be gathered together because it’s a very solitary profession. We each kind of do our own little thing and in some ways we’re competitors. But I felt this was an opportunity where we could have a rare collaboration.”
Publishers have also struggled through the recent economic downturn and he sees PHANfest as a great way to support their work, too. Participating publishers will have the opportunity to sell their literary magazines, books, and other products at PHANfest.
“One of the goals for publishers is not just to publish people’s poetry and fiction, but to also find readers for that work,” said Messineo, who founded Sensations in 1987 in Secaucus where it was produced for 14 years. He has since moved the magazine to Lafayette, New Jersey. “Festivals like this are an opportunity for [publishers] to do that promotion, that final leg of what [writers] expect us to do.”
“For the general public,” he added, “it’s a great opportunity for people who love poetry to hear it read live, to see some locally-published books and literary magazines, to support the arts of New Jersey by maybe purchasing something from one of the publishers.”
Messineo is optimistic that PHANfest 1 will be a success. There are already plans in the works for a PHANfest 2 next year.
“I’d like for it to rotate throughout the state, going to different libraries each year,” he said.
PHANfest will be held Sunday, June 13 from noon until 5 p.m. at the Secaucus Public Library and Business Resource Center, 1379 Paterson Plank Road, Secaucus.
The reading will be held in the Panasonic Room. There is a suggested donation of $10. For more information, call (201) 330-2083 or visit www.sensationsmag.com.
E-mail E. Assata Wright at awright@hudsonreporter.com.