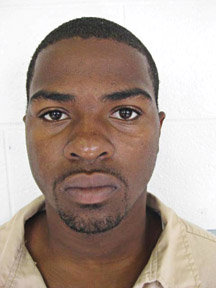 How did a 19-year-old Jersey City man go from being arrested twice for dealing narcotics near schools to allegedly killing five people in the last two months, including a recently engaged couple?
Shiquan Bellamy faces several consecutive life sentences if convicted of the five murders he allegedly committed in Jersey City this year.
Bellamy grew up in different parts of the city. He was recently charged – along with Darmelia Lawrence of Woodlawn Avenue and Latonia Bellamy (a relative of his), also both 19 – in the brutal shootings of Nia Haqq, 25, and Michael Muchioki, 27, on April 4 after the pair returned to their Randolph Avenue home following their engagement party.
Two days later, Bellamy was captured on an outstanding warrant for violation of parole. He had been released from prison last October.

“It’s so disturbing to think that I was riding the bus with a murderer.” – Anonymous Greenville resident
________

After his capture, Bellamy was also charged in the murders on Feb. 2 of cousins Mileak Richardson, 26, and Lester “Bleek” Thompson, 17. Both were found face down in front of a building on Woodlawn Avenue after being shot numerous times. His accomplices in the Feb. 2 murders, Hakeem “Hak” Lester and Ronald “Diddy” Lawrence (brother of Darmelia Lawrence), both 21, have been arrested as well.
Bellamy is also a suspect in the March 27 murder of Lamonte Wright, 20, who was shot once in the back while walking with his girlfriend on Clerk Street near Myrtle Avenue.
That makes Bellamy a suspect in more than half of the nine murders committed so far this year in Jersey City.
In the first and third murder incidents, according to authorities, the suspected motive was robbery. The motive remains unknown in the second incident.

Bellamy’s current address is on Arlington Avenue in the Greenville section of the city, a lower-middle class area located primarily in the southern part of town. The address is a newly-built two-family home with a garage.
A Greenville resident who wanted to remain unnamed, who lives a few blocks away from the address, said she used to see Bellamy riding on the NJ Transit No. 87 bus (which runs from the city’s Greenville section to Hoboken) from time to time.
“It’s so disturbing to think that I was riding the bus with a murderer,” the unnamed resident said. “He was so quiet, and I have seen him help a woman with her baby carriage.”
Pam Andes, who lives near historic Hamilton Park with her husband and two children, is one of the founders of the Downtown Jersey City Watch, a neighborhood crime watch that communicates with downtown residents and patrols crime hotspots in that upscale area.
Andes said that the downtown residents she knows don’t feel particularly impacted by the shootings with the exception of the couple killed, which she said was “heartbreaking.”
The murders were committed in the Greenville and Bergen-Lafayette sections of the city, about two miles away from downtown.
However, Andes said that some residents from areas outside downtown Jersey City are “devastated” by the shootings and have asked for help from Downtown Jersey City Watch.

According to Hudson County Prosecutor Edward DeFazio, it was forensic evidence from Haqq’s vehicle that led investigators to connect Bellamy to the other murders.
But as for how Bellamy became an accused triggerman for five murders, even DeFazio, who has served in the Hudson County Prosecutor’s Office for nearly 30 years, is at a loss for an explanation.
“I don’t think we can analyze any person who is capable of committing cold-blooded murder in such a depraved manner,” DeFazio said. “This is not rational conduct.”
DeFazio said Bellamy may have been using illegal drugs and alcohol before the shootings of Haqq and Muchioki, but that is not believed to have played a role in allegedly carrying out the murders.
DeFazio also ruled out mental illness, saying that Bellamy was competent when he was arraigned on the charges on Apr. 12.
Bellamy is currently awaiting trial but no date has been set. Bellamy’s bail was set at $6 million, $2 million for each alleged incident (two of the five were double murders).
An unnamed Jersey City police officer with over 20 years on the job, who was one of many officers who took part in the investigation, said Bellamy would not have committed the crimes as a part of some kind of street gang activity.
“Gangs would not engage in the shootings of people who were for the most part innocent, but of fellow gangbangers,” the unnamed officer said. “They would not want the heat from the public.”
In the last two years, many of the shootings in Jersey City have been thought to be among rival gangs. The recent shootings did not fit that profile.

Why wasn’t Bellamy caught after the first two homicides? One local law enforcement official has an answer.
Bellamy had an arrest warrant issued for him in January after he violated the terms of his parole after being released in October, according to the state Department of Corrections.
A few days after the warrant was issued, the Feb. 2 homicides of Mileak Richardson and Lester “Bleek” Thompson occurred.
Deputy Jersey City Police Chief Peter Nalbach confirmed the outstanding warrant on Bellamy and said he was picked up by the police on the warrant on Apr. 6. He said the outstanding warrant would not have stood out to law enforcement since Bellamy had not been considered a violent offender in the past.
Nalbach pointed out that the state’s parole board usually contacts a Police Department if they are searching for someone who violated parole who has a history of violence.
“[Bellamy] didn’t have a violent crime history as an adult,” Nalbach said. “The warrant was based on a drug arrest, not a violent crime.”
Nalbach added, “If the parole board had known he was a violent person, and [Jersey City police] had known, we would have gone after him from the get-go.”
Ricardo Kaulessar can be reached at rkaulessar@hudsonreporter.com.