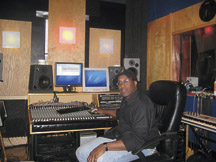 Music was always an organic artform for Rod Shepard, whose studio Xanthi Music in Hoboken opened 18 years ago to facilitate that growth.
Shepard, originally of Brooklyn, began playing guitar around the age of 7. He emulated his father, who played the instrument, his uncle who played the guitar and bass, and the group his uncles sang in.
“So family gatherings were pretty interesting,” said Shepard. “They’d get together and start singing and I’d think, ‘Wow, that’s cool.’ ”
Shepard wound up going to City College of New York for architecture. After working as a draftsman and an expenditure and building manager, he started to question his calling in life.
All the while, he performed in three bands.
One guitarist he played with owned a studio. Shepard began spending endless hours there. He went back to school for audio technology at the now defunct Center for Media Arts.
Soon he began fixing tech problems like wiring for studios in the tri-state area and beyond.
“As I’m doing this, I realize everyone’s got a studio except for me,” said Shepard.
After moving to North Bergen in 1990 with his wife Iris, he rented his studio at the Neumann Leathers Building in Hoboken. Iris is his partner in the business.
He named it Xanthi after a former band.
Not long after that, he began teaching guitar at High Tech High School.

The studio grew eight years ago after moving into a larger space. It has been used to record an 11-piece band, Discovery Channel voice-overs, up-and-coming musicians, and his own band, Mystic Rein.
“A large part of my business has never been from note worthy people,” said Shepard, who now lives in Fairlawn, N.J. “It’s been completely the opposite, [it’s about] the people who are trying to make something.”

Shepard’s teaching career began by performing a favor for a colleague.
His wife had been working with one of the teachers at High Tech’s Broadcast Media’s radio station who needed help. One day he asked Shepard if he could help fix some technology problems.
The school had an instrumental program, but the music teacher had trouble teaching students guitar since he had been a clarinet player. He asked if Shepard would like to teach the students guitar during the class.
After a full-time music teacher left, Shepard took on the job full-time.
This year, he is teaching the introduction into instrumental music, intro to guitar, intermediate guitar, an afterschool instrumental class, a performance support class for the departments’ major shows such as their accompaniments with the music theatre department, and an audio technology class.
He said that he often produces part of the musical theatre cast albums for their yearly performances at his studio.
Some of his former students have interned at his studio and become producers themselves.
Others, like Marquis McMichael of Jersey City, a High Tech graduate in 2003, began recording music at Xanthi while still in high school. He stopped by the studio last week and said that Shepard taught him a lot about guitar playing.
“He taught me professionalism,” said McMichael, who is now in the band Jet Setting. “He taught me arranging. How to make it right, in music it’s right or it’s wrong. Most kids just figure out a few chords and just copy their heroes, and he taught me how to take it to the next step and start having my own voice.”

Shepard remembers spending thousands of dollars for recordings and rehearsal space and said he finally was able to do things in his own way.
Mystic Rein’s new album, Déjà Voodoo, is an experimentation of genres and unique instruments, like the electric sitar and different types of percussion.
While he owns digital recording formats and editing programs, he also used vintage equipment in the production of the album, which included a reel-to-reel tape machine. He said it records with a warmer sound. He also still prefers to use his mixing console instead of his computer because there is “something instantaneous about it.”
He is currently working with a singer/songwriter who needed help putting his words to music, and a Latin pop project.
He said that some bands will travel hours away to record at his studio because of a “hidden reputation” that he has developed.
“I’ve been able to at least explore doing things that I’ve never done before, especially with combined styles,” said Shepard. “I’m not going to do anything that fits into the neat little compartment pre-cut prescribed world that a lot of people in the music businesses tell you you have to. I’m going to do things the way I want.”