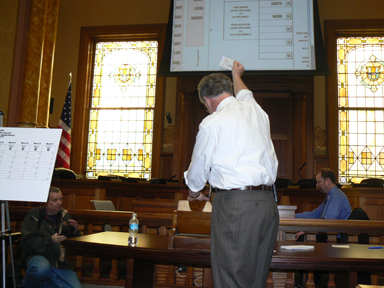 Not sure who to vote for? Visit the Hudson Reporter’s new website (www.hudsonreporter.com) to see video of the Hudson Reporter Mayoral 2009 Editorial Board Roundtable that took place on April 21 with the five Jersey City mayoral candidates. Also, check our archives for recent articles profiling the 42 candidates running for City Council.

Will there be runoff elections?

Whoever is elected mayor or city councilperson will start serving a four-year term on July 1.
With so many candidates in the field, there is always the possibility of a runoff election. If no candidate for mayor and the six ward council seats gets more than 50 percent of the vote, then the top two vote-getters for mayor and ward council will compete again in elections on Tuesday, June 9.
It’s a bit different for the council-at-large seats. According to Hudson County Board of Elections Clerk Michael Harper, if no one in the council-at-large race gets more than 50 percent, then the top six finishers will go to a runoff. However, if even just one council-at-large candidate gets more than 50 percent of the vote, the top three vote-getters will win the three at-large seats.
And then there is absentee and provisional voting. For those who can’t or don’t want to vote in person, they can fill out and submit an Absentee Ballot Application to the Hudson County Clerk until 3 p.m. on Monday the day before the election. The Hudson County Clerk’s office is located at 583 Newark Ave., which is the Brennan Courthouse.
Provisional voting means a provisional ballot is filled out at the polling place by voters who are for some reason not on the voting rolls. It may be due to a clerical error, for instance. Those ballots are reviewed by county election officials in the days after the election to determine if they are valid.
Anyone who has problems with conduct at the polls or malfunctioning voting machines can call the Hudson County Supervisor of Elections office at (201) 795-6555. Anyone with problems with polling stations not opening on time can call the Hudson County Board of Elections Clerk’s office at (201) 795-6030. And those who feel their voting rights are being threatened can call the New Jersey Division of Elections 24-hour hotline at 1-877-NJVOTER.