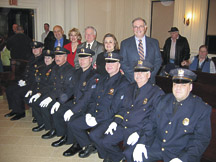 The Weehawken Police Department, to combat an increase in the crime rate last year, has promoted seven law enforcement personnel and launched several new initiatives.
A total of 413 crimes were reported in 2008, an increase of 78 over 2007, representing an overall crime rate increase of 18 per cent. Of those 78 additional crimes, 62 were due to larceny, including car break-ins and shoplifting, and the remaining were due to home burglaries.
“The promotions were one part of the reorganization,” said Public Safety Director Jeff Welz. “The promotions increase the overnight and weekend tours [patrol] to deal with crimes, and we introduced the anti-crime unit, which will deal [more] with car crimes and will work nights when most car break-ins happen.”
“I’m pretty confident that this will reduce the crime [rate],” said Welz.
At a reorganization meeting last Tuesday the officers promoted were Michael Avoletta and Carl Pasqualini to the rank of captain; Sean Kelly, Jason Czornomor, and Mitchell Chasmar to lieutenant, and Debby McGorty and James White to sergeant.

“We are doing some promotions as part of the reorganization of the police department based on the crime rate [increase] we had last year,” said Mayor Richard Turner.
Despite the recent increase, however Weehawken has continued to have a steadily decreasing crime rate over all.

Since 1991, the crime rate in Weehawken is down by 63 per cent, which is well above the state average decrease of 47 per cent.
“The police are doing a tremendous job, but the 18 per cent increase is a trend we don’t want to continue and a trend that is unacceptable,” said Turner.
The increase in car break-ins usually resulted from valuables being left visible in parked cars. Police believe the home burglaries mostly stemmed from a burglary ring allegedly operating out of the now-defunct Park Avenue Hotel. The ring was shut down last summer, and the individuals charged were found guilty of nine burglaries in the area.
The town saw a decrease in other sorts of crime. Violent crimes went down 3 per cent, and auto theft went down by 5 per cent.
“We have had a very good success rate with [decreasing] violent crime,” said Turner.

The reorganization of the police department began to take effect the day after the meeting, and will be fully implemented in 10 days.
“We have a net gain of two superior officers and an annex building on Park Avenue will be opened up for the police department’s Anti-crimes unit and Juvenile bureau, so the police have a presence in the north part of the township,” said Turner.
In addition, since the township along with the rest of the nation is being affected by the economic downturn, the promoted officers have accepted a delay in pay increase, and will not collect retroactive pay once their new salaries can be implemented.
“These officers know that this is not the time to increase the burden on the taxpayers,” said Turner. “We are committed to not do any layoffs.”
“This is wonderful,” said new sergeant, Debby McGorty, who is currently the only woman police officer working in a supervisory position in Weehawken. “I have 29 years split between several different police departments.”
McGorty has been with the Weehawken Police Department since January of 1997. She is one of seven siblings, most of which have taken on careers in law enforcement and civic duty. For the promotion ceremony, she was joined by her siblings, including two via cell phone, including her husband Patrick Russo, a retired Hudson County Police Officer; her daughters Jaime, Danielle and Erin, and her stepson Thomas Russo, a police officer in Norwalk.
“I just love the job and meeting people,” she said.
Lieutenant Jason Czornomor’s wife and daughters were also among the dozens of family members, who came for the promotion ceremony. Five year old Leighana Czornomor was sharing the exciting news with all of her classmates at school earlier that day.
“[I said] that my daddy was going to be a lieutenant,” said Leighana.
Meanwhile, two-year-old Savannah-Rae was smiling and happy in her father’s arms, and with mom Tricia and older sister Jaylynn, 7, standing close by.
“I am very happy, excited and overwhelmed,” said Czornomor, a life-long Weehawken resident. “I’m in my 14th year [of law enforcement] right now.”
“I could have never done this without the support of my wife and my family,” said Czornomor.

Jessica Rosero may be reached at editorial@hudsonreporter.com.