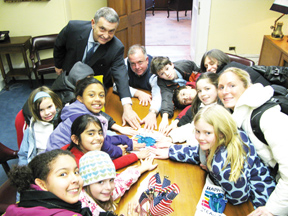 Over the last week, we have printed numerous “breaking” stories about Hoboken politics, intended layoffs, and other important issues. And it’s just the beginning! Check out our new website throughout the day at www.hudsonreporter.com, and also read the comments people have left.

A city spokesperson said Friday that seven provisional city employees were laid off before this weekend.
The layoffs were part of first stages of an overall plan to reduce the municipal workforce by 10 percent, Mayor David Roberts and Fiscal Monitor Judy Tripodi stated in a joint press release on Friday. The layoffs were not performance based, the city said.
The city has also lost 43 employees through retirement over the past year, officials said.

Hoboken University Medical Center (HUMC) is considering employee layoffs and service cuts in the near future to stay afloat, according to the hospital’s January newsletter.
The document said HUMC “may have to join the legions of hospitals across the nation, around the state, and up the block in making painful cuts to staff and services in order to remain fiscally stable during this global recession.”
Joan Quigley, vice president of external affairs, said Thursday afternoon that the hospital has alerted employees but has yet to make any final decisions.
However, another source from the hospital confirmed that layoffs are imminent, and yet other sources say pay cuts for remaining employees may also be coming.
Nonetheless, Quigley said the hospital has been feeling the effects of a downturned economy, but was not experiencing significant losses.
City Councilwoman Beth Mason has been requesting a copy of the general ledger of the hospital for some time now, to better gauge the fiscal health of the city-backed entity. The hospital was told by a court to provide Mason with a copy some time ago, but she said the hospital charged $9,000 to have a copy produced and sensitive information redacted.
Mason said she requested a digital copy, but the hospital said they could not easily redact all of the confidential information. The cost of the copy has been reduced to $2,000, but Mason has yet to accept the offer or see the document and does not understand why sensitive information would appear in a general ledger.
Mason said she reviewed an official hospital status report from October that said they were running a deficit of $2.2 million.

The City Council on Wednesday approved an application for a grant arranged with Hudson County. The state PARIS (Public Archives and Records Infrastructure Support) grant will allocate money for the city to hire college interns to sort through old documents, bring the city up to date with records retention schedules, and improve citizen access to public documents.

A city website that was designed and constructed last year may finally be made accessible in the coming month.
The city set and missed internal deadlines last year – and even for years before that – to have the user-friendly new site running, but according to a city source, it will be functional in February.

Open registration for child and teen baseball and softball leagues is set from Monday, Jan. 26 to Friday, Feb. 13. Signups sheets are at the Multi Service Center, 124 Grand St. on the second floor, on weekdays between 9 a.m. and 4 p.m. and at the Wallace School gymnasium, 11th Street and Willow Ave., weekdays from 6 p.m. to 7:30 p.m. and Saturdays from 10 a.m. to 1 p.m.
Age groups range from 7 to 15 years old. Parents are asked to bring a copy of the child’s birth certificate and proof of residency, like a utility bill.
Tryout dates for Little League baseball to follow. For more information, call (201) 420-2094 or e-mail recreation@hobokennj.org.

On Friday, Jan. 30, the Hoboken Rotary Club will host its annual art auction at All Saints Episcopal Church, 7th and Washington streets, beginning at 7 p.m., with the auction following at 8 p.m.
The event will benefit the Hoboken University Medical Center and the Rotary Club.
All artwork is custom framed and matted, and opening bids are up to 50 percent less than traditional framed gallery prices, according to a press release.
Tickets are available for $10 per person and $15 per couple. For more information, call (201) 441-3994.

Petition due to cancellation of crosstown bus

Due to budget constraints, the crosstown bus service provided by the city will cease operations as of Feb. 1, according to city officials.
According to some residents, a petition to reinstate the bus service has been circulating, especially among the many seniors who depend on the local transportation.