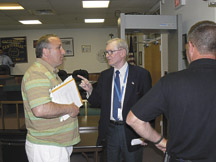 A week ago Thursday, Luisa Medrano, a Hudson County bar owner who pleaded guilty to a role in an international human smuggling ring in 2006, was granted probation by U.S. District Judge Joel Pisano in Trenton and allowed to return to work, rather than spend the 24 to 30 months in jail she’d been facing. She received a lighter sentence, many say, because she gave testimony to federal prosecutors against former Guttenberg Mayor David Delle Donna and his wife Anna, whom she had befriended and given gifts to over the years.
The testimony helped put Delle Donna, the $7,000-per-year part-time mayor of the tiny town of Guttenberg, in prison, along with his wife, Anna, who had served on the town’s Planning Board.
But some say that Medrano’s sentence for her own crimes is too light. The story may also be useful as a campaign attack against former U.S. Attorney Christopher Christie when he runs for New Jersey governor this year, as he has frequently cited the scores of corrupt politicians he has put in jail in New Jersey – but did not mention the accused lawbreakers who were rewarded for their testimony.
Medrano was given three years probation, with six months of it as house arrest. She has paid $250,000 in back taxes and will have to pay approximately $3,900 more in restitution.
The Delle Donnas are serving a 51-month sentence in federal prison. Medrano told prosecutors that she gave cash to the couple to use for gambling in Atlantic City; a dog with canine insurance; and various gifts in the hopes of receiving better treatment, as she was a bar owner and landlord in the area.
According to Assistant U.S. Attorney Ronald Wigler, Medrano admitted to harboring illegal aliens in three apartments that she owned as early as 2004. These women were required to work off their smuggling debt, which ranged from $10,000 to $20,000, by working six days a week from 6 p.m. to 2 a.m. at three bars owned by Medrano, according to a U.S. Department of Justice press release in 2006. At Medrano’s bars, El Paisano, Puerto de La Union I, and Puerto de La Union II in Union City, the women would earn $240 per week plus tips. The women, who included at least four juveniles, would get male patrons to buy them drinks and would dance with them for $3, according to prosecutors.

Last week, the Delle Donnas’ son, Joseph Tavano, said he was outraged by Pisano’s decision. He said it was a “miscarriage of justice” that was tearing his family apart.

“My parents are sitting in jail for receiving a dog and bottles of Grand Marnier from a friend.” – David Delle Donna’s son
________

“[Former U.S. District Attorney Christopher Christie] said he was going to make her pay for her fines, and she got probation,” said Tavano. “He said he was going to use the weight of his office to see that she was punished, and she got three years [probation] in order for her to go work. She pleaded guilty to harboring illegal aliens … and my parents are sitting in jail for receiving a dog and bottles of Grand Marnier from a friend.”

According to Wigler, Pisano said that Medrano never had a direct hand in the smuggling ring.
“None of the victims had indicated that Ms. Medrano in any way forced them to do anything or mistreated them, unlike several of the other co-defendants of this case,” said Wigler.
Guttenberg Mayor Gerald Drasheff, who replaced Delle Donna, said that it was unfortunate that the jury in the Delle Donna case, when listening to Medrano’s testimony, couldn’t forsee what she might get in exchange. He said that her credibility was also questionable.
According to published reports, Medrano’s testimony helped eight of her co-defendants receive convictions.

“It does raise a question as to who committed the worst offense.” – Gerald Drasheff
________

“The jury thought that the Delle Donnas were guilty, but a lot of that depended on her testimony, and she definitely had an incentive to be less than truthful,” said Drasheff. “It does raise a question as to who committed the worst offense.”
Christie stepped down from his position last month in order to run for the Republican nomination for governor this year, likely taking on Hoboken resident Gov. Jon Corzine. In his resignation letter, Christie noted his agency’s achievements in his seven years at the helm, including more than 130 convictions of elected and appointed officials without an acquittal.
Drasheff said that he is not running for governor, but if he were to, the Medrano decision could become a campaign issue against Christie.
But Drasheff did not want to talk about the case at length, noting that he wanted to move forward as mayor and focus on Guttenberg.

Tavano said he felt “duped” by Medrano and said that he felt sorry for the victims of the smuggling ring. He said that his parents’ attorney said Medrano gave 100 hours of testimony in the corruption case, but he believed that the crimes she was accused of far outweigh those of his parents.
According to court papers, the women in the ring were often sexually abused by their handlers.
Travano said that his parents were dealt a $9,000 tax evasion charge and are “sitting in jail” for a lesser offense than Medrano’s.
As a part of her original plea deal, Medrano forfeited two of her apartments. She pleaded guilty last week to a lesser tax evasion charge as well, according to Wigler.
Travano said his son missed his grandparents and that it “pains him as a father” to be in this position.
Della Donne’s mother, Dorothy, who lives in North Bergen, penned a handwritten letter of outrage to the newspapers about Medrano’s sentencing. She referred to Medrano as “a coyote from Cliffside Park.”
She wrote, “[Medrano] will be spending time with her family with a slight tap on the wrist, while Anna and David, who she manipulated, will spend years in separate facilities, thousands of miles away from their children, grandson, and parents, all of whom are spending sleepless nights and pangs of separation. Once again, I question our judicial system who allowed this. Shame! Shame! On them.” She signed it, “Dorothy Delle Donna, Dave’s mom.”
Tavano said last week that his father is doing “fine,” while his mother is having a harder time dealing with incarceration and the judge’s decision on Medrano.
“[My father] said, ‘Don’t let this consume you, we need to move on,’ ” said Tavano.
He said that right now he was hoping that an appeal for his parents’ release will be successful and that his faith in the system will be restored.