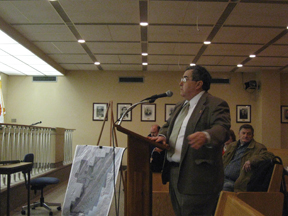 Guttenberg Mayor Gerald Drasheff, in his role as the planner for the Hudson County Office of Emergency Management, appeared before two Bayonne public bodies on Jan. 13 and 14 to explain the details behind the new emergency warning signals that will be installed in Bayonne and elsewhere in Hudson County.
Drasheff appeared after several City Council members raised questions last month about four sirens – similar to those installed nationwide as part of the nuclear warning systems of the 1950s – that were to be installed in Bayonne.

“This is a countywide alert system that has been in the works for at least two years.” – Gerald Drasheff
________

Drasheff said the new emergency sirens will be activated in the event of a catastrophic emergency when residents need to receive critical information. In most cases, the sirens will alert residents to tune into an AM radio station, which will give them the necessary information. The speakers can also give voice commands or be configured with local broadcast systems, such as a city-run cable TV station where local information can be issued.
“This is a countywide alert system that has been in the works for at least two years,” Drasheff said. “It is set up in consultation with all the municipalities. The contract was awarded about six months ago and we are ready to install the system.”
The funding comes from a $792,000 federal Homeland Security Grant and the project is expected to be completed by January 2010.
Drasheff said the system was designed by Acoustical Technologies Inc. of Boston, and powered by solar panels and batteries. Kevco Electric, of Riverside, will install 31 strategically placed sirens atop 55-foot poles throughout the county.
Council President Vincent Lo Re questioned the noise level that each cone shaped siren will emit. Nearest the siren, Drasheff said, the decibel level will be about 140 decibels and about 70 decibels at its most remote.
Drasheff said the sirens are meant to act in conjunction with a county radio system, but a dispute with parties in New York state over the frequency has delayed the implementation of the radio portion.
“It’s been delayed because some stations in New York have been trying to steal the frequency,” he said. “But we have it straightened out now.”
The Federal Communications Commission approved the county’s five-watt emergency station last fall.
Bayonne will see four sirens. Drasheff said the locations are still being worked out and not all will be on top of poles. He said the county may install a siren on top of City Hall on Avenue C. One siren is slated for installation at the border between Bayonne and Jersey City and will serve portions of both cities.
“The locations are based on a 70-decibel coverage area throughout the county,” Drasheff said. “The system will be controlled out of the county OEM office and the county sheriff’s office.”
He said each siren can be activated individually so that residents in a particular area can be notified if the emergency is local in nature.
“We could activate the units in Bayonne if we needed to get a message out to residents here,” he said. “The system is designed for a tone, but the unit we purchased has the capability to do voice communication. It doesn’t give us 100 percent voice communication throughout. We would have to add another 50 percent coverage for that. But the funding just wasn’t there. If additional funding comes available, that may be an add on we can do.”
Each unit is solar powered, which charges batteries in the unit so that sirens do not require hard wiring, and they are activated by a radio signal.
The OEM will be engaging in a public education program so that when people hear the tone, they can tune into the county radio station or local media for more detailed information as to the nature of the emergency and what they should do.