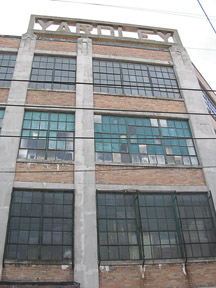 An old soap and perfume factory in Union City that has become a familiar sight on the Palisades may be demolished as part of a redevelopment plan.
The Yardley building, constructed in 1916 on Palisade Avenue, may have to make way for two new residential towers, according to Union City Redevelopment Agency Executive Director Tom Leane.
“Originally, we were going to put five stories on top [of the building] and build a separate tower,” said Leane last week. However, plans changed when it was discovered that the original four-story structure would not be able to sustain the weight of additional levels.

The Yardley property makes up 3.13 acres of a nearly 6-acre redevelopment zone from Fourth Street to Sixth Street that was approved in 2003. However, development has been hindered because of a court battle among the property’s owners.
When towns designate a redevelopment area, they come up with plans to revitalize blighted property and can change the zoning in that area and seek out developers. They can also buy the property from the existing owners through the use of eminent domain, or demand that the owners conform to the new plans.

After the area was deemed a redevelopment zone, Yardley owner Richard Kocher planned to develop the property but lacked the resources to do so. As a result, he teamed up with Panepinto Properties, a development company based in Jersey City.
Leane said last week that the partnership had problems, and a dispute began between the two sides. Panepinto Properties decided to purchase the property from Kocher.
Then, Panepinto asked the Union City government to get involved.
“Panepinto came to us and asked us to exercise eminent domain on the property,” said Leane. “We did.”
The agency assisted Panepinto in going to court to have the property appraised by a third party. Panepinto would have to pay Kocher whatever amount was determined in court.
In the meantime, Kocher sold the property to a New York-based development group, Leane said.
In 2007, a Superior Court ruled that Panepinto Properties would be able to purchase the property from the New York group for the appraised value, which was assessed at $5.6 million. But the New York company is still disputing the price.
“They want a lot more for the property,” Leane said.
He added that the final price was actually supposed to be determined this month, but the New York group requested an extension between four and five months.
“This summer, we should see the final cost,” said Leane, “and determine where we are, and then, we can move on to the project.”

The Yardley building is still in use, said Leane.
“There are still some industrial uses in that building,” he said. “There are some people who have studios and warehousing.”
However, Panepinto Properties is leasing to them only on a short-term basis, said Leane.
“They don’t want any long term tenancies; they want short term tenancies so that when they get approved, they can go to development, they can move,” he said.
He added that the firm has even paid the relocation costs for some previous tenants.
Leane also said that with all the costs so far, Panepinto Properties has probably already spent $10 million on the project.
Panepinto Principal Joseph Panepinto was out of the country last week.

The number of stories for the towers that may replace the building has not yet been determined, said Leane, but zoning laws for the area allow up to 29.
He said space will be made between the towers so as not to block the view of New York. Town officials have also recommended on-site parking for residents and guests. Retail, including restaurants and dry cleaners, may also be part of the mix.
Plans specific to the Yardley building were made five years ago, said Leane, and the final plan, whatever it will be, will have to be approved by the Union City Planning Board and the Board of Commissioners.
Leane also speculated that because the plans are now so old, town officials will probably host public meetings again to discuss them.
Leane said that a groundbreaking for the project could be held in a year.