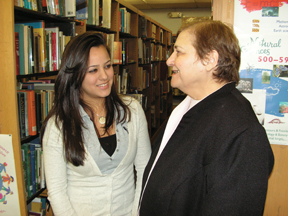 Governor Jon Corzine gave a Union City High School senior an honorable mention for academic excellence during his State of the State address last Tuesday.
He called 17-year-old Kamaris Loor “one of New Jersey’s bright hopes for the future.” Loor was recently accepted early decision with a scholarship to an eight-year medical degree program at Brown University.

Brown is a prestigious Ivy League university in Providence, R.I.
“She is clearly on a track to success,” Corzine said in his speech.
Loor said last week that it was an honor to be recognized by the governor and to attend the event.
“It’s great to have all these things happen to me,” she said, “but, I honestly just did it because I think you have to do what you love, and you have to do it because you love it and you want to be better and you want to be the best. That’s basically just what I went after, and it ended up turning out great for me. I think everyone has to take advantages of the opportunities that they’re given.”
Loor said that she would not have been able to achieve all that she has without the help of Union City schools and teachers, including one in particular, her mentor and now close friend, Union City High School’s North Campus Science Department Chair Nadia Makar.
Makar, who has been teaching in Union City for 29 years and accompanied Loor to the speech, was also noted in Corzine’s speech, as he claimed that behind every great student is a great teacher.
Makar, who wrote Loor a four-page letter of recommendation for her application to Brown, said that the future doctor is a very special student.
“Kamaris always impressed me,” said Makar. “She is very organized. She follows through. Whatever you tell her to do, she does it. She is very prompt, and she is a perfectionist. Anytime you ask her to do something, she will bring it at the right time, always perfect.”
Loor is currently on her way to graduating with a more-than-perfect grade point average, a 4.2 out of 4.0. Extra points are often given in high schools for honors classes.
Makar said that Loor has always shown great enthusiasm in her work.
“It is this type of student that really makes me enjoy teaching so much and remain in teaching,” she said.

In the recent past, Loor has won several awards for a breast and colon cancer prevention research project she developed during a summer program at Rutgers University.
She has also taken extra night and Saturday classes at schools such as the New Jersey Institute of Technology. Last summer, Loor spent a month at Brown taking a human anatomy course.
“That was just mind-blowing,” she said. She added that she got to dissect a cat in an actual lab used by the university’s medical students.
In addition to excelling in her academics, Loor is also a county champion swimmer, winning first place in the 100-meter butterfly competition in 2007.
“It’s sort of a family sport,” she said. “All my other sisters are in swimming, too.” She added that she is one of four girls in her family, including her twin sister, Karina.
Loor said she has thought about swimming for the Brown team, but that may have to wait.
“I don’t think I’ll start right away,” she said. “I think I want to get settled into just handling school and everything else.”
Loor said she is still not sure what kind of doctor she wants to be and that she keeps changing her mind.
“I was thinking pediatrician one week and then the next week, I was on to psychiatrist,” she said. “I just go all over the place.”

While at Brown, Loor said she will also take several international relations courses, as she is very interested in world politics.
Loor immigrated to the United States from Ecuador with her family when she was 3 years old. She started learning English in kindergarten.
Loor lived in Union City most of her life but recently moved to Ridgefield, N.J. with her family