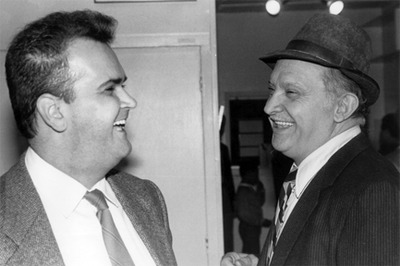 Maurice Fitzgibbons sits in the back of the Elysian Café in Hoboken as if he owns the place. He has come here so often for so long that everybody knows him, particularly the management, which greets him like a family member each time he comes in.
Fitzgibbons often frequents establishments he considers the core of the Hoboken he grew up in, institutions that hold a special meaning in his life. So naturally, he would choose to meet at this historic cafe at Tenth and Washington streets to talk about his career, now that he is leaving as Hoboken’s freeholder after 15 years.
The nine-member county freeholder board votes on issues related to the county’s roads, personnel, facilities, and budget. The county is also run by a county executive and staff. Fitzgibbons represented the 5th Freeholder District, which includes Hoboken and Jersey City Heights.

Long before Maurice Fitzgibbons first ran for Hudson County freeholder, he was deeply involved in local politics. His departure from the freeholder board on Jan. 1 marked the end of an era.
A Hoboken native, Fitzgibbons worked in government for two decades before he decided to run for freeholder in 1993.
Fitzgibbons, who just turned 53, served as Hoboken’s recreation director at age 20, and was Democratic Municipal Chairman twice, from 1994 to 1998, and then again in 2008.

From ward committeeman to freeholder

Elected a committee person in 1981, Fitzgibbons served on the Ward 5 state Democratic Committee, one of six state representatives in Hudson County.
Fitzgibbon is proud to have been one of the 12 original members of the “Coffee Group” that in 1985 began a movement that led to the election of Jim Florio as governor.
Fitzgibbons later became the state commissioner of ethnic affairs after Florio was elected in 1989. He also worked as a special assistant for constituent affairs in the governor’s Newark office. As the administrator of the Cultural and Heritage Affairs Commission in Hudson County, he worked to increase tourism here.

Major supporter of the arts

A graduate of what was then Jersey City State College, Fitzgibbons majored in English and theater, and over the years has been a strong proponent of the arts. He envisioned a future as an actor after graduation and for several years was involved with the Roundabout Theater in New York and was coached by actress Julie Bovasso.
For this reason, he has a soft spot in his heart for the arts, and indeed, one of his great disappointments as freeholder was his inability to get a county high school for the arts established. As chairperson of the freeholder board in 1997, he tried hard to establish the Hudson County High School for the Performing Arts to be housed in the Demarest School in Hoboken (the school Frank Sinatra attended back when it was still a high school).
Over the years, he also served as a trustee at the Jersey City Performing Arts Center in the Loew’s Theater. As a public relations specialist, he continued to serve as publicity chairman for Hoboken’s annual St. Ann’s Italian Festival.
“I really wanted a school for the arts, but I never got the political support I needed,” he said.
While the arts high school did not materialize, Fitzgibbons believes he played a critical role in developing other county institutions during his four terms in office. They include the purchase and reconstruction of a new county administrative office building slated to open later in 2009; upgrades to the Hudson County Community College and the construction and opening of a North Hudson facility, and the promotion and expansion of the college’s Culinary Arts Programs.
He played a key role in the historic recognition of Hudson County as a capital of the embroidery trades. He also pushed funding for the Hoboken Museum and restoration of the Hoboken YMCA and funds for the Boys and Girls Club, improvements to Columbus Park, and the pending reconstruction of the 14th Street Viaduct.

The son of late Hoboken firefighters union official Michael Fitzgibbons, Maurice Fitzgibbons lost the support of the Hudson County Democratic Organization (HCDO) in 2008 after he scrambled to survive a Democratic Party political civil war. But he said he wasn’t forced out of office; rather, he left on his own to pursue personal business interests.
During his talk over lunch, he mentioned the remarkable parade of political figures he has had the pleasure to meet and work with over the years, from the legendary Speaker of the House of Representatives Tip O’Neill to the biggest name in contemporary politics, Barack Obama.
He has rubbed shoulders with Gov. Jon Corzine and U.S. Sen. Bob Menendez so often he sees them as political friends, and for years has had a strong relationship with former state Sen. Bernard Kenny, one of the statesmen of Hudson County politics.
As often as politics changes hands in Hoboken, Fitzgibbons said many of the key people have remained constant for decades.
“Jimmy Farina [the Hoboken city clerk] was one of my mentors,” Fitzgibbons said.
A partner in the public relations firm FitzMedia of Jersey City, Fitzgibbons said he will turn his attention to his business, although he believes he will be called on for advice in the future.
If he has a legacy, Fitzgibbons wants people to know he left the county in better shape than he found it.