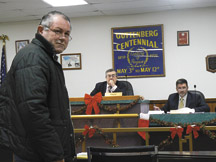 After announcing two months ago that the Guttenberg Town Council would look for bids for consultants to help create the town’s master plan, Phillips Preiss Shapiro Associates, Inc. was approved at the Town Council meeting on Dec. 22.
A master plan is a long-range description of how the town wants to develop and change its existing guidelines for development. Guttenberg’s master plan has not been updated in 20 years.
Once a new master plan is drawn up and approved, the town can alter its zoning laws to conform to it.
Mayor Gerald Drasheff said the planners will develop an idea that will go to the town’s Planning Board and then to the council. The typically also hold public hearings.
The firm, located in New York City, was one of six bids and will have a year-long contract that will not exceed $25,000.
Drasheff said that he was impressed with the work the firm had done with Hoboken’s master plan.

Waiting on the state

During the council’s caucus meeting, Chief Financial Officer Vince Buono said that they are still waiting to complete their budget.
Guttenberg’s proposed budget is $12.9 million, with $9.8 million coming from tax payers, compared to a $9.2 million tax contribution in last year’s fiscal budget.
“We stand still,” said Buono. “From our side the town has done all it can. In Trenton however, [Gov. Jon] Corzine proposed a short-time pension deferral program that would defer our pension obligations about 50 percent.”
Until this pension program is approved, state aid applications are not being looked at yet, said Buono. He said that the town would have to either issue an estimated first quarter tax bill, or retract their aid estimate and approve their budget as is.
“We could adopt a budget that way, but my own feeling is that we should not withdraw our application for extraordinary aid,” said Mayor Gerald Drasheff. “We’ve been successful in the past, but even if we are not, I’d like them to at least look at it and know how we operate.”

Last year the Hudson County Board of Taxation approved a tax refund for $374,953 for the Galaxy Mall, which is a separate entity from the Galaxy Towers Condominiums. The tax judgment was for 2005 through 2007 and included interest.
Drasheff said that last month they authorized through a resolution that they were going to purchase bonds to cover the debt. While they look for a buyer, the town will be paying the Galaxy Mall through their current funds.
Vasilious Scoullos asked the council at this week’s meeting what would happen if no banks would purchase bonds for this debt.
Buono said that the bond market had “certainly been disrupted,” but that the town’s bond attorney was confident that they would be successful.

Luz Shaw, a former interim candidate for council, was appointed by Drasheff to fill the position of alternate member on Guttenberg’s Planning and Zoning Board.
Drasheff said that he chose Shaw because he believed she would have a good attendance record and was a “grassroots” Guttenberg resident who would be able to get the job done.
Drasheff said that Shaw has been involved with town activities as a committeeperson.

Assemblyman Vincent Prieto was appointed until Jan. 31 to continue temporarily filling in as the town’s construction official and zoning officer. The yearly salary for construction official is $21,000 while the zoning officer is $4,000.
Prieto also fills the same role in Secaucus.
Drasheff said that the town was happy with the work Prieto had done and that they will decide later this month if he will remain in the position on a more permanent basis.