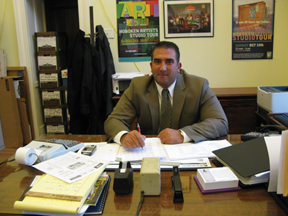 The city’s financial firm of the past three years is out, as is controversial Tax Collector Louis Picardo.
Due partly to the mile-square city’s precarious financial situation and to scheduled retirements, several top Hoboken officials and consultants retired or were replaced in the past few weeks.
The city’s state-appointed fiscal monitor, Judy Tripodi, has hired a new full-time financial director, Nick Trasente, at $125,000 per year. She hopes he can help lead the mile-square city out of its financial difficulties, which led to a 47 percent overall tax hike this year.
The financial firm of Donohue, Gironda, and Doria was under contract to handle city finances for the past three years, but their contract recently expired and was not renewed by the city.
In addition, the city’s tax collector, Louis Picardo, retired last week after over 35 years in City Hall. Sources said the city has not yet started a search to fill his position and that his retirement was a personal decision.
Picardo has been at the center of some controversial situations during his time at the city. Recently, his home at 920 Castle Point Terrace was the subject of a lawsuit by neighbors over what they say is an improper addition. A judge ruled that a different town official had made a mistake, and referred the case to the city Zoning Board to see if variances could be granted for the mostly-finished home improvements.

Among employees whose departure was not related to city finances, Joe Peluso, director of environmental services, recently retired after over 30 years with the city. Peluso was highly regarded among his peers and rarely caught the ire of the council or mayor.
He will be replaced in the interim by James Ronga, who was overseeing grant management for the department.
The city saw 12 municipal employees retire over the last month, including Picardo, Peluso, and Jude Fitzgibbons, a city inspector, union representative, and brother of outgoing Freeholder Maurice Fitzgibbons.

Meanwhile, the new financial director, Trasente, is a former administrator and CFO in Highland Park and state auditor.
The Donohue firm will stay on with the city for a month to ease the transition.
Fiscal Monitor Judy Tripodi says Trasente’s salary, $125,000, is a cost savings of $200,000 from the previous contractors, although Donohue, Gironda, and Doria had a team of three full-time employees and a couple of part-time assistants.
The cost savings does not include Trasente’s benefits package or any other employees hired to assist him. The city did not pay for benefits for the non-renewed financial firm, only their annual cost of $325,000.
All considered, Tripodi said she expects an annual cost savings of approximately $100,000 from the move.

The position of financial director has not been filled by the city for years, and may now expand to encompass not only the Finance Department, but also tax collection, grant management, and purchasing, one official said.
“I look forward to this exciting challenge and, moving forward, we will put together a capable team to overcome the city’s financial challenges in a quick and prudent fashion,” said Trasente in a press release.
Trasente will oversee CFO George DeStefano and will report to the city business administrator, when that position is filled. The position has been vacant since the resignation of Richard England following last year’s budget mess. Although England resigned the role of business administrator, he has stayed on as purchasing agent for the city.
“The finance director will have a vested interest in the city of Hoboken as a municipal employee. This will result in greater accountability,” Tripodi said through a city spokesperson. “In addition, as a direct result of being a municipal employee, the finance director will able to implement financial policy.”
Tripodi worked with Trasente in the state’s Division of Local Government Services.
“Mr. Trasente’s vast range of financial knowledge, both in the public and private sectors, make him ideal to work closely with Hoboken’s fiscal monitor to overcome present financial difficulties,” said Mayor David Roberts in a press statement.
The city said last week that Kathryn Kinney, a financial specialist from the outgoing firm, will be offered a permanent position with the city at $90,000.
Many people lauded Kinney’s ability to step into the middle of the city’s financial mess and handle herself well over the past six months.

Two asked to retire because of mishap?

Sources confirmed last week that two other top city officials were recently asked to retire by State Fiscal Monitor Judy Tripodi because of their involvement in an allegedly mishandled contract. Sources said one of the officials, a city director, said he would not stay on as a consultant if he retired. The other official flatly turned down the request to retire, sources said.
The mishandled contract pertained to city contributions for a section of the waterfront walkway at Maxwell Place. According to sources, the city may be responsible for a much larger portion of the funding because of the way the contract was worded.
Also, the allocation of the funds for the project was allegedly never approved by the City Council, sources said.
The city would not comment on the allegations last week. – TJC