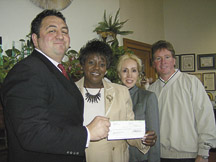 The Jersey City Police Department announced in a statement on Thursday that their search has ended for the body of a deceased baby boy, which was discovered missing from Christ Hospital on Palisade Avenue earlier this month.
The police, in a statement issued on the department’s web site (www.njjcpd.org), said their search for Bashere Davon Moyd, Jr. led to a landfill in Ashland, Ky., where the baby’s body ended up after it was alleged to have been inadvertently dumped by the hospital along with regular hospital trash.
In the statement, the police said based on their investigation that the “portion of this refuse may have been incinerated prior to our involvement in this incident.” Also in the statement, the police said the alleged dumping was the result of “procedural deficiencies and human error.”
Bashere Davon Moyd Jr. was born in the hospital to Kalynn Moore of Jersey City on Dec. 21. But the baby passed away that day. There is disagreement between the hospital and Moore on whether he was stillborn or died immediately after birth. The issue can make a difference regarding litigation, since according to New Jersey law, a stillborn baby is not considered a person.
According to Moore’s attorney, Michael Anise, the baby was then supposed to be picked up by a funeral home on Jan. 2 for his funeral, but the baby was discovered missing.
An hour after the police statement on Thursday, Anise, with a sad, teary-eyed Moore standing next to him at Anise’s Summit Avenue office for a press conference, read a statement that said the news about Bashere was a “mother’s worst nightmare” and that the “son that was to be Kalynn’s Christmas blessing is gone.”
Also, Anise read from the statement that “everyone involved in this horrific act must be held accountable.” Moore did not take any questions during the press conference.
Anise after reading the statement there would be an investigation by his office looking at hospital documents and surveillance videos before making any decisions on filing a lawsuit.
Christ Hospital issued a statement after the attorney’s press conference stating in part, “The entire Christ Hospital family shares in the grief of Kalynn Moore and apologizes for adding to her pain. We are dismayed and saddened that efforts to locate the remains of her stillborn son have failed.”

The Temple Beth-El in Jersey City is holding its 24th Annual Sabbath Service honoring the memory of Dr. Martin Luther King, Jr. on Friday, Jan. 16 at 7:45 p.m. Temple Beth-El is located at 2419 Kennedy Blvd. The service is open to the public.
The featured speaker for the service is Dr. Robert L. Johnson, MD. Johnson is the Professor of Pediatrics and Psychiatry as well as a dean and director at the University of Medicine and Dentistry of New Jersey.
Also, Rabbi Kenneth Brickman and Cantor Jamie Marx will be conducting the religious service.
For more information, call the Temple office at (201) 333-4229.

Coat, cell phone drives continue ’til mid-Jan.
The Burlington Coat Factory is joining forces with national nonprofit One Warm Coat and the ABC show Good Morning Americato carry out the Second Annual Warm Hearts and Warm Coats Drive through Jan. 16. The Burlington Coat Factory store on 1514 Willow Ave. is a drop-off location for coat donations. The coats collected will be distributed free of charge to children and adults locally. Coats donated should be in good condition with working fasteners, no rips and stains. For more information, visit www.BurlingtonCoatFactory.com.
The Jersey City Police Superior Officers Association will be participating in Cell Phones for Soldiers, a national cell phone drive for military personnel overseas. All used cell phones will be collected at each of the city’s four police districts in specially marked boxes through Jan. 15. The goal of the Jersey City drive is to collect enough cell phones for more than 150 troops overseas. For more information, go to www.cellphonesforsoldiers.com.

Track meet at the Armory
The Jersey City Department of Recreation will be holding a youth track meet, the Charles Mays Invitational, at the Jersey City Armory on Jan. 15 at 5 p.m. It is second of three meets held this winter at the Armory, located at 678 Montgomery St. in Jersey City.
For more information or to obtain an application, call (201) 333-6884.

Gospel music at JC Museum
The Jersey City Museum presents an afternoon of gospel music as gospel artists Eller Weas Little and NewVintage perform on Friday, Jan. 16 at 1 p.m. Admission is free.
The museum is located at 350 Montgomery St (corner of Montgomery and Monmouth streets).
For more information, call (201) 413-0303 or visit www.jerseycitymuseum.org.
Individuals and senior groups interested in attending can call Jersey City Senior Affairs for transportation at (201) 547-4361.

Statewide Parent Advocacy Network (SPAN), in conjunction with the Five Corners Branch Library, presents “Basic Rights in Special Education” on Saturday, Jan. 17 from 1 to 3 p.m.
The Five Corners Branch Library is located at 678 Newark Ave. in Jersey City.
The workshop is an introduction to the rights and responsibilities of parents of children with special needs under the Individuals with Disabilities Education Act (IDEA) 2004, the State Special Education Code 2006, and Section 504 of the Vocational Rehabilitation Act.
The workshop is free. Those interested in attending can register on-line at www.spannj.org/training, or call Vivian DeWitt at (973) 642-8100 Ext. 116, or Agnes McLean at (908) 731-4360 Ext. 5381. Also for information, call (201) 547-4543.

Clarification
In the Dec. 14 edition of the Jersey City Reporter, an article on New Year’s resolutions contained a misstatement by one of the persons interviewed. Mahmood Ketabchi, an organizer for Parents and Communities United for Education (PCUE), gave as his resolution that his organization will deal with new tests given for high school students to be implemented this coming year. Those tests are only in the discussion phase at the NJ Department of Education.