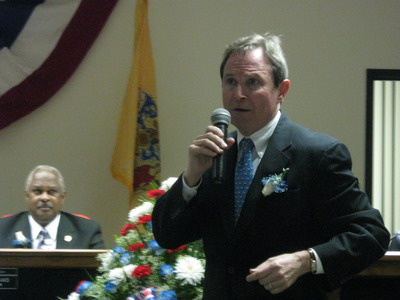 The behind-the-scenes negotiations to get Bayonne Freeholder Doreen DiDomenico elected as chairperson of the Hudson County Board of Freeholders lasted until just minutes before she and others were scheduled to be sworn in for their new terms on Jan. 6.
The nine-member freeholder board votes on matters related to policy and finance for the county’s agencies, roads, and institutions.
Although some freeholders wanted to retain Freeholder Jeff Dublin for another term as chairman, a pre-meeting tally showed most wanted to give the seat to DiDomenico, with the only remaining question whether or not she could garner a unanimous vote.
In a move designed to start the new year without major conflict, the freeholders elected DiDomenico 9-0.
The Jan. 6 meeting also included the swearing-in of all of the freeholders who were elected in November. The freeholders must run for office every three years.
The reorganization meeting takes place every year to give freeholders the opportunity to pick new leadership from among themselves.
Sworn in by Bayonne Mayor Mark Smith, DiDomenico thanked the board for its vote of confidence.
“I look forward to working with this board and the county executive to meet the needs of the people of Hudson County,” she said.

Chairperson, vice chair and pro temp are considered the three power positions on the board. The distribution of these seats generally shows how political power is distributed throughout the county.
With the recent victory of Mark Smith as mayor of Bayonne, and with the behind-the-scenes support of Hudson County Executive Tom DeGise and other key county political figures, DiDomenico’s election as chair was preordained.
In electing Union City Freeholder Tilo Rivas as vice chair, the board acknowledged powerful Union City mayor and state Sen. Brian Stack – who, because of a Union City Commissioners meeting, was unable to attend the swearing in.
A clearly elated Rivas called this “a great night for District 6” (the Union City freeholder district), and thanked God, his family, and the freeholders. But he also paid tribute to his mother who recently passed away, and said he was grateful for the opportunity to serve the people of Hudson County in this capacity.
Jersey City Freeholder Bill O’Dea was elected as pro temp, the third ranking position on the freeholder board, but not without numerous jokes.
Sworn in twice, once as pro temp and again for his three-year term as freeholder, O’Dea brought two very powerful figures together: Union County State Senator Ray Lesniak, who said, “Bill and I go back more than 20 years,” and Jersey City Mayor Jerramiah Healy, each of whom got the opportunity to swear O’Dea in.
O’Dea thanked his colleges for the opportunity to serve.
“I’m very honored to have served on this body since 1997, and look forward to continuing to serve the people of Hudson County,” O’Dea said.
County Executive DeGise, commenting on the election of the board members, said, “The people chose wisely. We are going to face the most challenging time of my tenure, both as county and a country.”

DeGise also welcomed newly-elected Hoboken Freeholder Anthony Romano, saying he will have large shoes to fill in replacing former Freeholder Maurice Fitzgibbons. In what appeared to be one more joke at O’Dea’s expense, DeGise said there was a rule of thumb Romano should follow: “Look to see how Bill O’Dea votes, then vote the opposite way.”
Although Healy and state Sen. Sandra Cunningham lobbied hard for Dublin’s reappointment as chairman, Dublin had to settle for serving as a voting member on the New Jersey Association of Counties, a post previously held by Fitzgibbons.
Freeholder Jose Munoz was named as an alternate voting member, while Hudson County Administrator Abe Antun will serve as the second alternate.

Also at the meeting

Also at the freeholders’ meeting, Kearny Mayor Alberto Santos was retained for another year as the clerk of the freeholder board, with Wilfredo Ortiz serving as his deputy. Edward Florio was reappointed as the board’s counsel with Carmen Mendiola as his deputy.