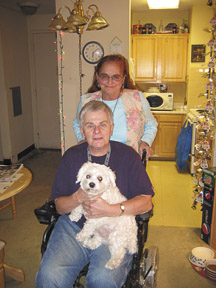 Along North Bergen western cliffs, Hilda Kohl has been virtually trapped within a one-block radius for years.
Kohl, 63, fell outside of her home in North Bergen’s senior housing at 6299 Grand Ave. four years ago and suffered bilateral sever osteoarthritis of the knees and Lumbo-Sacral Degenerative Disc Disease. According to a letter from her orthopedic surgeon, Dr. Christine Corradino, she is not a candidate for surgery because of the high risk of the procedure.
Corradino and general physician Dr. Flordeliz Panem of the North Hudson Community Action Corporation branch in North Bergen have both written letters and prescriptions alerting her health insurance company that she needs a new motorized wheelchair.
But for the last four years, she has been denied every single time.
She presently uses a motorized wheelchair that a friend of hers gave her. But it can only maintain a half-hour of battery life and has wheels that have been so badly battered that they are held together with duct tape.
In a letter sent to her health insurance company Amerigroup, her doctor Panem calls the wheelchair “dilapidated” and unsafe to use.
When the battery was in better condition, she was able to travel to Bergenline Avenue and had some sense of independence, she said. Now she cannot go food shopping and is only able to make it to a small store close by.
North Bergen is considered one of the hilliest towns in the country, town officials have said in the past, with only San Fransisco ranking ahead. Kohl’s own street is on a high slope. This presents an added problem.
“They [doctors] don’t want me to go anyplace,” said Kohl last week. “If I come down the hill [on a manual wheelchair] I’ll go flying down to Tonnelle Avenue. I won’t be able to stop.”

Kohl, originally from Hoboken, moved to North Bergen seven years ago.
Mona Georgetti, a neighbor of Kohl’s who lives a few floors above her in the same building, constantly asked Kohl when she would be getting a new wheelchair when they first became friends four years ago.
Kohl lives alone with no close relatives to help her, so Georgetti has spearheaded the battle to get her a new wheelchair.
“Hilda is like a sister to me,” said Georgetti.
Georgetti has pushed Kohl’s doctors to send countless letters to insurance company. When Kohl first had Americhoice as an insurance provider, Georgetti recommended that she switch to Amerigroup for better coverage, but the results were the same.
Georgetti herself needs knee surgery and travels by a motorized scooter.
The pair sometimes take Access Link, a transportation service for the disabled whose cost depends on the distance they travel.
Georgetti even turned to a non-profit organization called Project Shape in Jersey City, but when they reached out to Kohl’s insurance company they were rejected as well.
“I don’t think that they understand that North Bergen is a hilly area and that there is no Senior Citizen transportation that accommodates people in wheelchairs,” said Georgetti.
Motorized wheelchairs run for $2,000.

In a letter on Dec. 19, Amerigroup Community Care Vice President Eric Berman stated that Kohl was rejected because the “clinical information submitted for review was insufficient to establish medical necessity.”
Kohl has 60 days from this letter to appeal the decision at Amerigroup’s appeals department by sending a letter, or she can file for a Medicaid Fair Hearing with the State of New Jersey.
In a memorandum on Dec. 4, a doctor for Amerigroup asked Panem to withdraw her request for Kohl’s wheelchair, stating the “Member wants an electric wheelchair to go outside over hills. Amerigroup does not provide wheelchairs for outside use.” They offered to rent her a manual wheelchair, but she’d have to pay for it.
Both she and Georgetti worry about how long Kohl’s current wheelchair will last and if she will be able to get a new one.
“I’m at my wit’s end,” said Georgetti.
Georgetti said that the Kohl’s doctors have been persistent and brilliant, but they have been stonewalled nonetheless. The only other option would be for Kohl to purchase a chair herself, which is difficult. Kohl, who is 100 percent disabled, receives a $493 social security check each month and must pay $131 rent, which leaves her with “nothing,” she said.
“I used to be walking a lot,” said Kohl. “I can’t walk anymore. I’m stuck.”
If you have a way to help Kohl, please e-mail editorial@hudsonreporter.com and put “wheelchair” in the subject head, so we can put you in touch with Kohl.