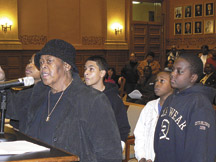 If Laverne Webb-Washington was a boxer, she would be described as having the tenacity of a Joe Frazier and the forcefulness of a young Mike Tyson.
But the closest the longtime Jersey City community activist and frequent City Council attendee has come to being a pugilist is in her advocacy for the Newark-based non-profit organization COMBATT (Community Organization Making Boxing Alternatives Today for Tomorrow). Founded by former New Jersey Athletic Board Commissioner and boxing referee Larry Hazzard, the program provides boxing training and other recreational activities for at-risk youth at gyms in Newark and Irvington. Washington has for the last few years driven local children to the COMBATT gym in Newark in order to keep them off the streets.
Washington came out swinging for the program at the Dec. 17 City Council meeting, during the public comment portion. She specifically described how some of the children from her neighborhood, whom she brought to the council meeting, have been impacted by their involvement. They were in the audience standing while Washington spoke.
“Some of these kids behind me I pulled away from the gangs, some of them was hustling in Arlington Park but had stopped because we had been taking these kids to Newark,” said Washington to loud applause. Arlington Park is a city-operated park located between Arlington Avenue and Grand Street in Jersey City.
Washington also pleaded with council members for their help in bringing the program to Jersey City.
Hazzard and other supporters also addressed the council about bringing a boxing gym for youth to Jersey City.

The fight that’s right
Lester Albright, a boxing trainer based in Jersey City, said he also wants to implement a recreational program such as COMBATT in the city, but there are very few facilities where any training can take place.
Albright pointed out that Dupree’s Gym, located on Martin Luther King Drive, where he learned boxing as a young man, is now closed.
“When these kids don’t have an outlet and when we can’t create a safe haven for them, the trouble is waiting out there for them,” Albright said.
City Council President Mariano Vega instructed Albright to talk to the newly appointed director of the city’s Recreation Department, Joe Macchi, who happened to be standing at the back of the Council Chambers, about space for boxing training.
COMBATT founder Larry Hazzard came to the meeting to offer support to Washington, and to invite council members to come to the Newark gym and consider helping Washington bring the program to Jersey City.
He also gave testimony of one of the Jersey City youngsters, Jalil, who participates in the program and competed recently in the New Jersey State Finals of the National Silver Gloves Tournament.
“His teacher came all the way from Bayonne and said that this program has turned this young man’s life around, and it has done the same thing for hundreds of youngsters,” Hazzard said. “So you have a moral obligation to give [Washington] your support.”
For more information, visit www.combatt.net