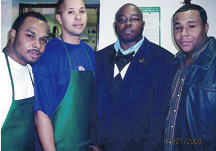 About this special issue

This special “2009 Preview” issue of the Hudson Reporter replaces your regular issues in Hoboken, Jersey City, Guttenberg, North Bergen, Secaucus, Union City, West New York, and Weehawken. Next weekend, we resume regular production with the issue of Sunday, Jan. 11.
Have you seen our new, frequently updated website? It’s been redesigned and now allows breaking news and comments from you, the readers! Check out the new www.hudsonreporter.com.
Letters return Jan. 11, so please send them in! You can do that via our website, www.hudsonreporter.com, or send to editorial@hudsonreporter.com. Your phone number must be included at the end of the letter, and the letter must be under 500 words.
If you have questions, e-mail us, or call (201) 798-7800. Happy 2009!

Beginning on Jan. 5, New Jersey Transit will close the Pershing Road Stairway in Weehawken to repair and improve the portion of the staircase that meets the terminal. The work is scheduled to take four to six weeks to complete. Residents are reminded to use the free Weehawken community shuttle bus available every 30 minutes from 6:30 a.m. to 3 p.m. and from 4 to 10:45 p.m., Monday through Friday.

An employee of County Prep High School, a Hudson County public school in Jersey City, was arrested last week at his Ocean County home in connection with the alleged sexual assault of a 16-year-old girl.
According to the Ocean County Prosecutor’s Office, Gustavo Bordenabe, 44, a math teacher and girls soccer coach at County Prep, was arrested Monday in Point Pleasant Borough where he and the alleged victim both reside.
Ocean County Prosecutor’s Office spokesperson Michael Moehl said Bordenabe was charged with sexual assault, endangering the welfare of a child, and criminal sexual contact. According to Moehl, the charges stem from a joint investigation by the Point Pleasant Police Department and Ocean County Prosecutor’s Office after a family member of the alleged victim contacted the police.
Moehl said Bordenabe allegedly assaulted the victim at different times for more than a year. Moehl would not comment on how Bordenabe and the alleged victim knew each other.
The school is part of the Hudson County Schools of Technology. Schools of Technology spokesperson Paul Swibinski said Bordenabe has been suspended with pay at the present time due to his tenured status. But Swibinski added that Hudson County Schools of Technology superintendent Frank Gargiulo is seeking a legal opinion on suspending Bordenabe without pay pending the investigation.
Swibinski also emphasized that the alleged victim was not a student at the school.

A teacher at West New York Public School No. 3 died after collapsing in the classroom on Thursday, Dec. 18.
Joanne Churchman, a special education teacher, was rushed to Palisades Medical Center but died in the ambulance on the way to the hospital.
“We deeply mourn the loss of Joanne Churchman,” said Superintendent of Schools Dr. Robert Van Zanten. “She was a teacher in the district for many years, a great colleague, a good friend and she will be sorely missed.”
Churchman had been a teacher in the school district for more than 30 years.
A district spokesman said they do not yet know the cause of death.

A North Bergen housing inspector trainee who allegedly stole a car with a victim in the passenger seat on Thanksgiving was arrested by Lyndhurst Police on Dec. 27.
According to Lyndhurst Police, at approximately 3:58 a.m. on Nov. 27, officers responded to a 911 call. The victim, a 38-year-old Weehawken woman, was with a co-worker in a car in Lyndhurst. They were outside of their place of employment. The co-worker went inside, leaving the Weehawken woman in the car.
The Weehawken resident told police that with the car idling, a strange man allegedly entered the vehicle and began to drive the car. When he realized he wasn’t alone in the car, he allegedly held a 12-inch long kitchen knife to the passenger’s neck.
Julian Cosma, 48, of Moonachie, was arrested for the crime. He had been employed as a part-time housing inspector trainee in North Bergen, according to North Bergen Spokesperson Ruth Villalonga. She said Cosma was supposed to take the housing inspector test to progress past the training level, but that never happened.
Since his arrest, Cosma has been suspended without pay, said Villalonga.
The victim told police that when the suspect encountered construction and had to turn the vehicle around, she was able to remove the knife from his hand, jump out of the car, and run toward to building her co-worker had entered.
The victim received a minor cut to her hand. The stolen car was recovered later that morning along the same road where the incident occurred.
Lyndhurst Police made the arrest Dec. 27 around 1 a.m. when Cosma was arriving home, said Det. Captain John Valente. The North Bergen and Moonachie police aided in the investigation.
West New York Police, after learning that a similar carjacking had occurred in that township on Dec. 7, have filed separate charges against Cosma.
Cosma has been charged with first degree carjacking, aggravated assault, possession of a weapon, and possession of a weapon for unlawful purposes. Bail was set at $750,000.

Longtime Union City resident Larry Price has won yet another suit against high-rise development in his hometown.
An appeals court overruled the Union City Zoning Board’s approval of an 18-story, 90-unit residential building at 1410-1416 Manhattan Ave., according to published reports.
The Appellate Division of the Superior Court stipulated that if the developer, Strategic Capital Partners, wanted to continue with the project, the firm would have to wait for zoning laws to change. Right now, zoning laws permit a structure with only 30 units. Town officials said that zoning laws may in fact change in the near future, according to published reports.

A week ago Monday, the Secaucus Town Council announced that an attorney will soon review proposed language for an ordinance that may resolve an alleged conflict of interest involving one of its members.
Town Councilman Michael Gonnelli has faced a conflict of interest charge since he was elected in 2006 because he also serves as a senior officer in the Secaucus Volunteer Fire Department. At the time he was elected, Gonnelli was battalion chief of the department. He is the current deputy chief and was scheduled to be sworn in as chief on Jan. 1.
The conflict charge stems from the opinion of some attorneys and elected officials that Gonnelli essentially supervises himself, since the Fire Department answers to the Town Council.
Recently, the governing body has sought ways to eliminate the conflict. An attempt Dec. 17 by Mayor Dennis Elwell to create a new administrative chief, who would take on many duties and leave the fire chief jurisdiction over matters specifically related to fighting fires, was opposed by the department brass. Fire department officials viewed it as a radical change in command structure and a possible opening to a paid firefighting force to replace the current volunteers.
A different proposed change was discussed Monday. It had been drafted by Town Councilman Gary Jeffas, an attorney, who serves as the council’s liaison to the Secaucus Volunteer Fire Department.
At the public council meeting that followed the caucus, Gonnelli announced that he was guardedly optimistic that a resolution had been reached.
Town Attorney Frank Leanza must now review the proposed ordinance to make sure it will, in fact, remove any conflicts Gonnelli might face as a councilman and fire chief. If he concludes the proposed ordinance resolves the conflict, the resolution will be formally introduced early next year.
The council has agreed on an interim chain of command for the Fire Department until Gonnelli is cleared to be sworn in as chief. On Jan. 1, current chief Robert Parisi will end his term as planned, and current Battalion Chief George Schoenrock will be sworn is as chief. Gonnelli will remain in place as deputy chief. William Sallach, who was elected battalion chief in December, will be sworn in to that position.
If a path is cleared for Gonnelli to become chief and he is eventually sworn in early next year, he would move up to the chief position and Schoenrock would become deputy chief.

A diverse lineup of blues artists will perform at Jersey City’s landmark Loew’s Jersey Theatre for the premiere event of the “Loew’s-Down Blues” Concert Series, Friday, Jan. 23 from 7:30 – 11:00 p.m. Performers include Arthur Neilson, the Dave Gross Band with special guest Gina Sicilia, Enzo & The Bakers, Dennis Gruenling, Christine Santelli and guest MC Kevin Kiley. The Loew’s Jersey is located at 54 Journal Square in Jersey City.
Presented by Jersey City Magazine, the concert series’ promotional partners and sponsors include the Journal Square Restoration Corporation, Friends of the Loew’s, the City of Jersey City, Square Ramp Parking, The United Jersey Blues Network, the Hudson Reporter Newspapers, The Jersey Journal, WFDU-FM, and The New Jersey Urban Enterprise Zone Program.
Tickets are available for $20 at loewsjersey.org, or at the event for $25. Tickets can also be purchased (cash or check only – no credit cards) at The Franklin Tavern, 97-99 Franklin Ave., West Orange, Ruthie’s Pizza and BBQ, 64 ½ Chestnut St., Montclair, the Journal Square Restoration Corporation Office, 4 PATH Plaza, Jersey City and the Hudson Reporter Office, 1400 Washington St., Hoboken. The cost of parking for ticket holders will be reduced for the event to just $5 at Square Ramp Parking, located directly behind the theatre.
For more information, call the Journal Square Restoration Corporation at (201) 795-1854 or visit thenewjournalsquare.com. For more information on the theatre, call the Loew’s Jersey Theatre at (201) 798-6055 or visit loewsjersey.org.

Registration for spring classes at Hudson County Community College has begun. Classes start Friday, Jan. 23 and end on May 18. For more information, please call the Office of Enrollment Services at (201) 714-7200. Students who have earned 30 or more college credits are eligible to register online at www.hccc.edu.

The Weehawken Weekenders’ annual “Evening at Pegasus” at the Meadowlands scheduled for Jan. 9 will now be held Friday, Jan. 23. The evening includes a buffet, admission to the racetrack, valet parking, and a Weekenders’ trophy race for $55. For more information, please call (201) 319-6059.

Jersey City issues rabies advisory alert
According to a published report, Jersey City has issued a rabies advisory alert after a raccoon struck by a car on Sunday in the city’s Heights section tested positive for the potentially deadly virus.
Anyone exposed to a raccoon or other animal through a scratch or saliva should immediately contact a physician. Anyone who comes across a sick or injured animal should immediately contact the city Animal Control office at (201) 547-4888 or police at (201) 547-5477.
Also, the Animal Control office advises people to avoid close contact with any animal showing signs of being rabid such as foaming at mouth, aggressive behavior, overfriendly behavior; wobbly or sickly appearance. Also they advise using disposable rubber gloves to inspect pets for bite wounds or cuts and wash hands thoroughly. Pets with bite wounds should be treated by a veterinarian, their food should be kept away from wild animals, and pets’ rabies shots should be kept up to date.